At the beginning of April in Germany, many outdoorsmen are drawn out to their hunting stands as the roe deer buck season is just around the corner. As the month progresses, the roe buck will become more and more territorial. It is a perfect opportunity to witness this yearly natural battle over territory first hand and to gauge the number and types of bucks on your grounds. Specifically, this is a most opportune time to assess what age ranges the various bucks are at, as it becomes increasingly more difficult as the season progresses. Here are some of the most important aspects to help you determine a roe deer bucks age:

The antlers offer a lot of information and clues as to what age a buck might be, but should never be the sole source for determining it. Allways contextualize what the antlers tell you to become as accurate as possible and minimize the risk of wrongfully categorizing the age.

Have they rubbed or still covered in velvet?

A german saying goes "Old rubs before young". It is a usefull colloquial that many hunters are taught during their training and refers to the fact that older bucks shed their antler velvet earlier than younger bucks. Some yearlings can still sport their antler velvet up untill June, while some brave bucks shed their antler velvet completely as early as mid-April. After shedding, the coloring of the antlers is not a reliable factor for age determination however. Buck antlers will come out lighter or darker from the velvet depending on what bushes and thickets the buck raked against or what tree types he rubbed them against. When the buck rakes or rubs, tree sap and other fluids emerge from the scratches on the vegetation and will leave different colors on the antlers.

The height and seating of the coronet are quite telling indicators of the bucks age. Some rules of thumbs: The older a buck is, the deeper the coronet is seated on the skull. It comes from the fact that with each yearly shedding of the antlers, the coronet is affected. Further, as the buck ages, the coronet will not only sit deeper but also more to the sides with greater separation. A younger buck, especially a strong one, will have almost no separation at the base with highly seated coronets. If both of these characteristics are not present, it is a good indicator that the buck is more mature.

Particularly earlier on in the season, the hide serves as a reliable indicator of age for a buck. With summer and winter seasons, deer shift color to match their surroundings better. In winter, the hide will be a more muted gray-ish tone, while the buck in summer will sport a vibrantly strong coloured red-ish hide. Roe deer usually shift colors from the neckline on downwards and later on through the back. The front and sides are usually the last areas to shift color. If it is early in the season and a buck emerges with a fully colored neck, you can be quite sure that this is a younger buck.

Surely this is one of the more difficult and vague indicators of age for a roe buck. Roe deer fawn mature into yearlings where they maintain their young facial features and the skull has not yet fully grown. In its third to fourth year, the bone structures roe deer will stop growing as the bone hardens and the buck will start to look more mature. Once he reaches seven years of age, the more fawn-like facial features appear again and it can be deceiving to the observer.

As roe deer mature in age their face will exhibit a dark or grayish patch that stars on the forehead and generally extends further around the face the older the animal is. The germans have a special word for this "Muffelfleck" which translates into mufflon stain
This patch carries a lot of significance for seasoned deer hunters, but I find it to be impossible to judge a bucks age solely on this marking. The facial coloring of a deer is just like a fingerprint, it is unique and will vary from individual to individual both in size and nuance. One can definetly say though that the most mature bucks will be more grayed. Yearlings and fawns will not display this patch at all. 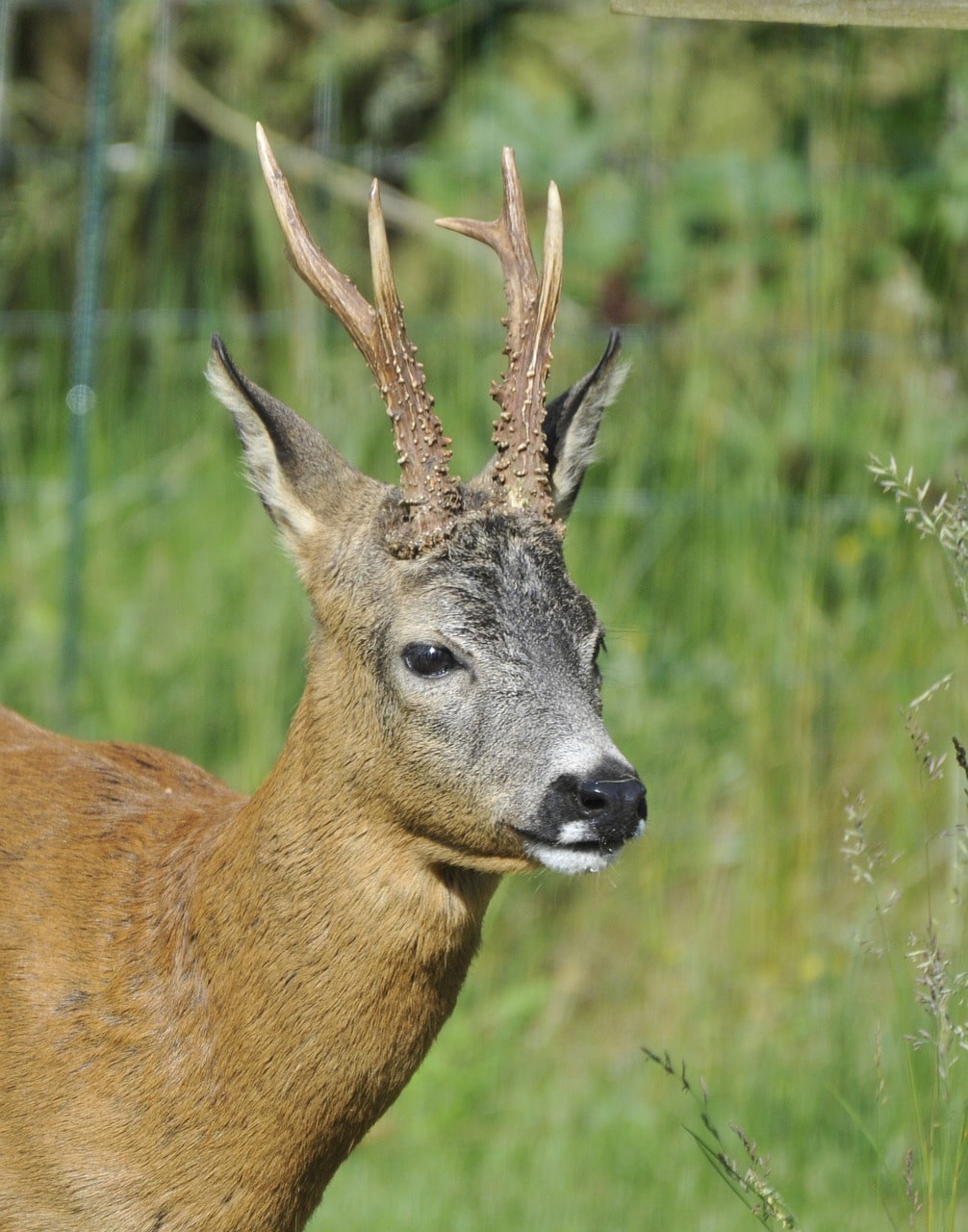 The width and thickness of the neck and throat are quite reliable indicators of age. These can vary naturally and are dependant on the area in which you hunt as well. Food supply, seasonal effects such as a harsh winter and the general health of the deer population all affect the bodily structure of the deer. That is why it is important for the seasoned hunter to know his hunting grounds well not just from a topological standpoint.

A wide and thick neck in combination with wide stance of the legs are to me good indicators of an older buck. Younger bucks often have a narrower stance and the legs will be markedly paralell to eachother. They usually prance more boldly and their gait appears more powerfull. Mature bucks generally display a wider chest as well as they carry most of their body mass in the front parts which gives them a bull-like appearance.

Throughout your entire hunting life, you will probably not come across a mature roe buck who is jumping and skipping around the fields in careless fashion. Particularly during the day while the sun is shining brightly, providing full exposure to any predators. This behaviour is only exhibited by the younger, less attentive and apprehensive bucks. As bucks mature into older age, the territories they claim and wander shrink in size and they tend to stray around less. Older bucks are more careful and watchful and are less likely to engage other bucks who wish to infringe on their territories.

When determining the age of a buck, the name of the game is to first identify as many different pieces of information as possible and then to evaluate them accurately. Thus, if you encounter a roe buck in mid-may who has completely shed his antler velvet, with a deeply seated coronet and markedly gray tones to especially his face and overall hide you can pretty safely conclude that this is a mature buck.

Should you however  come across a buck who struts and prances around well before the break of dawn in bright sunlight, with a radiant red-ish coat with tightly and high-seated antlers then it would be safe to conclude that he is one of the younger ones.

The many facettes to determining the age of a buck is a big draw for many hunters. For the upstanding hunter it is vital to retain that sense of curiousity and learning, because nature will allways surprise you and only experience can make you a better buck hunter. Patience is also key, as you will need to carefully study the roe buck for all the signs of age rather than just relying on a few indicators.

This article would not be complete if I didn't mention at least a few suitable calibers for hunting roe deer bucks. For European bucks, the more moderate calibers tend to be the best choice such as the 308 Winchester or the 7x57. As for projectiles, my preference lies with expanding bullets as it guarantees a reliable penetration and energy release even on wider distances. Speedier calibers such as the 223 Remington, 243 Winchester or even 300 Winchester Magnum have often left me to try and salvage a deer with large hematomae and a lot of meat lost. I would therefore advise a slower but heavier bullet with good expansion.