I immediately started handloading this fine caliber with N202 powder, obtaining good accuracy and outstanding terminal effects on big game. Season after season i learned how effective was the old German doctrine: heavy soft point bullets at mild velocity equals complete penetration, massive wound and game on the ground. And this at its best in woods.

The Next step was a nice Stutzen rifle chambered in 9,3x62. With its short barrel practically duplicates the 9,3x74 performance, with a remarkable preference for light bullets. I usually hunt with this rifle using the 232 grains Norma Oryx. Roe deer, wild boar, fallow deer, all have fallen by the lightweight Oryx.

Now is evident to every experienced hunter that both 9,3x62 and 9,3x74R are more than enough for anything walking on the old continent and north America. And they are adequate for most African big game.

During the golden age they both have been used on the big five with success by farmers, hunters and guides, and more. Today, with better bullets better powders, you can squeeze more velocity, energy and terminal performance from these old beloved workhorses.

So why the hell a European hunter that has never hunted outside Italy should ever buy a heavy, expensive, vintage and beautiful rifle chambered for the big bad son of Wilhelm Brenneke? The answer is: Because it exists! 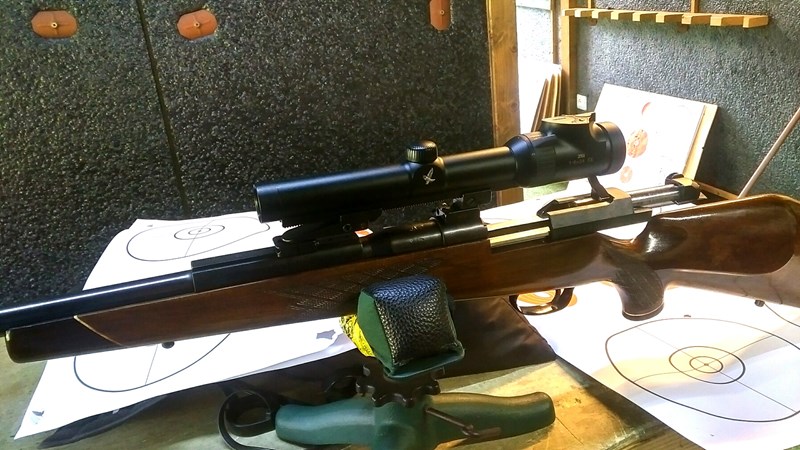 Jokes aside, the 9,3x64 cartridge can match .375 H&H’s performance if handloaded properly, with the fine benefit that .366 bullets always have better sectional density and ballistic coefficient than .375 of similar weight.

You can find dozens of different kinds of bullets, from 180 up to 325 grains of weight. All these advantages in a normal length action, in a cartridge that is just one millimeter longer than 30-06, with a roomy tough brass that is perfect for the modern slow burning powders.

On the other hand, many countries in Africa pretend that .375 bullets are minimum requested for Big Five (for this reason Steyr and Hornady gave to the light the .376 Steyr, working on the 9,3x64 brass with a .375 bullet, intended to work on a short action. A great idea that encountered a small but solid plethora of users).

Only RWS and Brenneke still have this caliber on catalogue. They both have good products that could easily tackle any big game on the northern hemisphere. RWS, few years ago presented a new ammunition with the 180 grains Evo bullet that practically is the same as 8x68S’s performance with a lightweight leadfree fragmenting bullet.

Brenneke proposes the 247 grains TOG, a modern bonded stout bullet with outstanding performance. And they both still produce the mythological TUG bullet, a real fossil of the megafauna age. Born in the first years of the past century, this iconic bullet has passed through two world wars, the economic boom, the millennium bug and the social media era virtually unchanged. Probably no other bullet has killed more big games worldwide through centuries than the old 19 grams TUG. And it still does...

Many say that it has an obsolete design and poor construction nowadays, but I think that none of them have never seen how this old Ogive works when used properly. Nevertheless, if you want to understand the real flexibility of the Brenneke's son, you must be a brutal hand loader.

Playing with powders, primers and bullets you can easily replicate 9,3x74R, 9,3x62 and 9,3x66 performances, or overcome them Flying to 6200 joules (if you really need it). Virtually could be possible to hunt almost any game from roe deer up to cape buffalo and elephant. 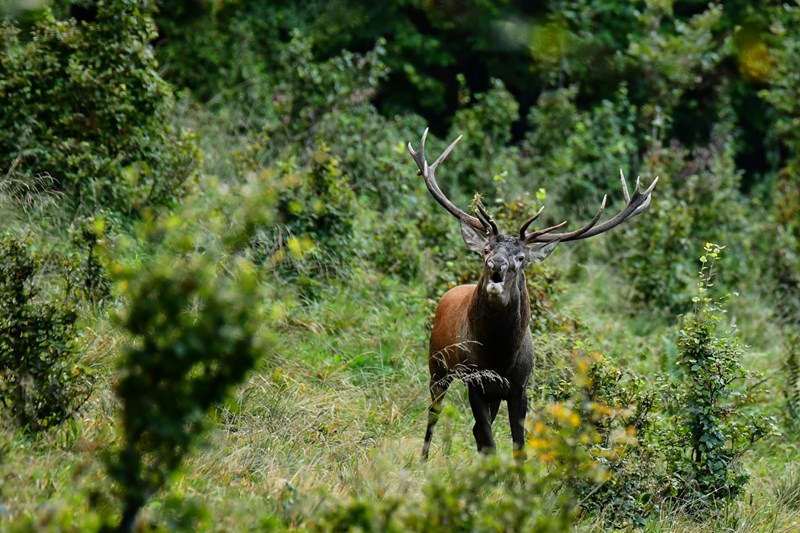 Back to reality, months ago I was talking with a close friend about the red deer. I’ve had a good season, with a big stag, killed during the rut. While the old monarch was bellowing, I was able to silently sneak closer, to about 50 meters. The heavy bullet, tossed at 970 m/s by the 8x68S, was a quick inexorable judgement.

My friend had a different kind of view. Hunting in the alps, often stalking deer in woods. He prefers the heavy punch of the 9,3 mm, but after the Vaya tempest, that berated the alps, breaking down millions on trees, in short; things have changed.

Now many areas are completely peeled, fallen Woods have been removed creating very large pastures. The red deer population is increasing rapidly, creating some problems with the reforestation.

The authorities will probably change the permits to enhance the forest to grow. Hunting in pastures means long shots, up to 250-300 meters, and probably a 7 mm Magnum could be the right kind of medicine - due to its orographic conformation, an instant kill is imperative. We both agree that delayed kill mean hours of work to recover the meat and the trophy.

We often have the same problem here in Tuscany, were hills are sweet, but the vegetation is so close to stop the sunlight. A wounded deer or worse, a wounded wild boar, will surely reach the deepest and closest bush - waiting for barking dogs, determined to fight.

These conditions cost the life to dozens of dogs per year, and this is even more dangerous with big red stags. As a strong enthusiast of the 8 mm, I suggested my friend to change his choice of caliber to 8x68S or 8 mm Rem. Mag. But he replied that it would have been great to have the stopping power of the .366 bore with the ballistic performance of a Magnum: accuracy, velocity and knock down power.

The answer was the 9,3x64 Brenneke. I was working on some loads from months, using different bullets and powders, but for this special purpose my choice was the classic bullet, Norma Alaska. Using this simple but reliable bullet for driven hunt, I know exactly how effective it can be on big game.

Although, it's basically a “cup and core” bullet, its heavy weight and high sectional density should achieve deep penetration and heavy punch even over 200 meters. In the past I have studied some interesting loads for the 9,3x64, everything from small to medium game. I have had astonishing terminal performance with 232 grains Norma Oryx, with a muzzle velocity of 850 m/s, but with predictable over expansion. I started testing Alaska bullet with N202 and N203B powder, obtaining accuracy and power. 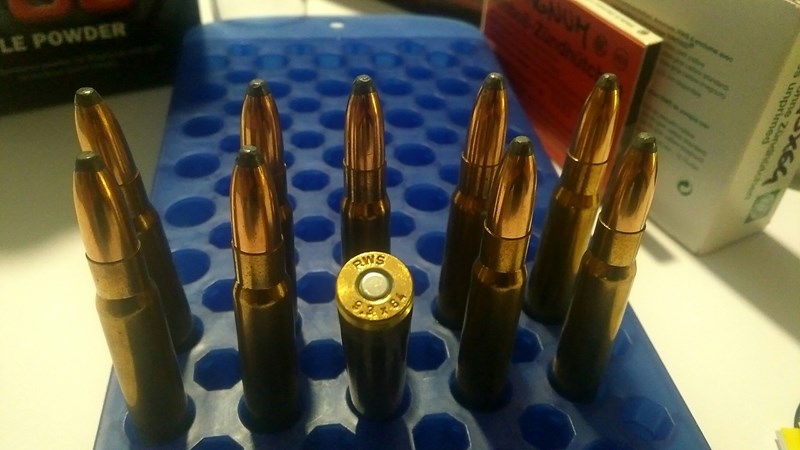 More velocity with a lower pressure

Nevertheless, I was not completely satisfied. I was sure that the roomy brass could has been filled with a slower powder, squeezing more velocity with a lower pressure.

I decided to replicate the old stout charge that RWS had in catalogue years ago; a soft point 286 grains bullet, tossed at 800 m/s, 6000 joules of energy, but with a more recent slow burning powder and a superb bullet.

As written, with 203 B powder i obtained a nice grouping but with a lower velocity than I expected.

It was too much. too much recoil, too much pressure, too much stress on the brass, weapon and shooter. Primers were flattened by high pressure, brasses elongated enough to harden the bolt opening and after all, with horrible accuracy. The worst group ever seen from a Mauser.

Counting on the long heavy barrel of the old Mauser Europa, 204 or URP powder were the best candidates, but unobtainable. I used RS60 powder, without any idea about minimum and maximum weight, since is hard to find data about this old rare caliber.

I used the cartridge length suggested in the RWS manual for the Teilmantel bullet.

Quickload was a great help. Theoretically it could be possible to elaborate an incredible load with a muzzle velocity of 830 m/s, floating around 6400 joules, but I need all my fingers, and I like to be prudent.  This time, the first approach was successful.

Practically a safe load, able to effort high temperatures due to the relatively low pressure, and surely good for African safaris, while with brass filled up to the 98% and magnum primers should be efficient below zero too, losing some energy.

Field testing was better than expectations, with the impressive velocity of 800-805 m/s elevated by the chronograph. The recoil is strong but manageable, progressive, not disruptive, powder burns completely, with no smoke signs on the bottleneck. Accuracy at 100 meters is more than acceptable for the caliber, especially considering the size of the game we want to hunt.

Many will say that every 7 mm or .30 Magnum would do the same job, the same way with a lot less job and pain. The world is wide, and I have never been a fan of the easy and simple ways. If the smart Wilhelm, one century ago, have spent his genius designing this master caliber, probably is worth to see how it works. Now the harder part: waiting until September come.

All this happened weeks ago, before the pandemic. Now my homeland, and the entire world, is facing an invisible terrible enemy. Hunting is only a sweet memory but also a consoling thought for the future. Be sure that we'll come back to the woods one day.