Two years ago i bought a barrel for my old Mauser Europa 66 by my gunsmith.

It's rare to find a barrel chambering the old beloved 7x66 Vom Hofe, but finding a barrel made in 1972 never used before is like finding a treasure. The barrel was virgin, never drilled for installing a scope, never mounted on a rifle.

The first bullets i have used on this nice caliber were the Ballistic tip 150 grains, without outstanding results. I spent all the summer hunting roe deers with incostant terminal ballistic effects. Sometimes i had immediate killing with a lot of meat wasted, sometime delayed killing with some meat ruined. Finally i decided that the bullet was too fragile for the caliber, especially for shots within 150 meters.

The following winter i found a nice load using the affidable KS bullet from RWS.

The Vom Hofe 7 mm caliber loves flat base bullets, and the 1:9 twist rate is perfect for 120-160 grains bullets. 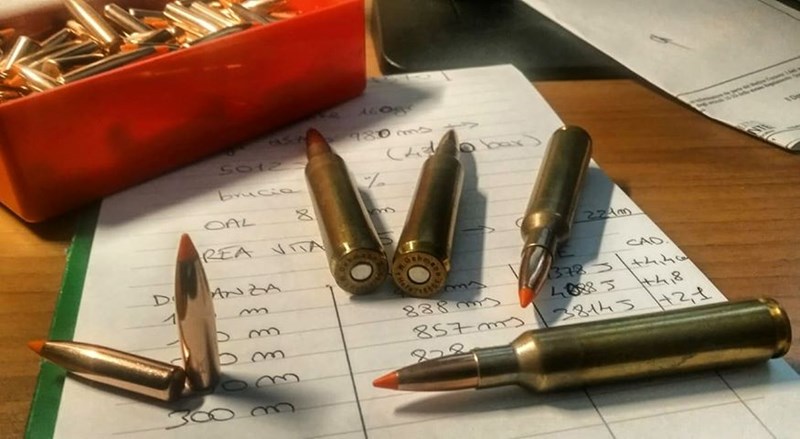 Teorically the KS bullet had to be the best choice, being extremely accurate, affordable and deadly. On the other hand, it remains a soft point bullet with a traditional construction, and this was the real doubt i had. Using The MRP powder i was able to obtain an outstanding group at 100 meters. The following months i spent all my free time hunting roe deers and fallow deers. The terminal ballistic was a bit cruel but always constant. I have always seen deers falling on theyr steps also with long and less accurate shots. Within 250-300 meters this bullet has always been in its comfort zone.

After the last spring i moved to N570 powder. The MRP is probably the most constant powder for magnum calibers, but the slower N570 promised to increase the velocity by 40/50ms. And so it was.

A slow burning powder is perfect for the long, roomy case of the 7x66 Vom Hofe. It's volume is probably one of the higher of the old calibers, 94grains of water.

The modern slow burning powders are able to increase the performance of this old noble horse giving it a new impulse.

With this new load i was able to hunt two hard games. 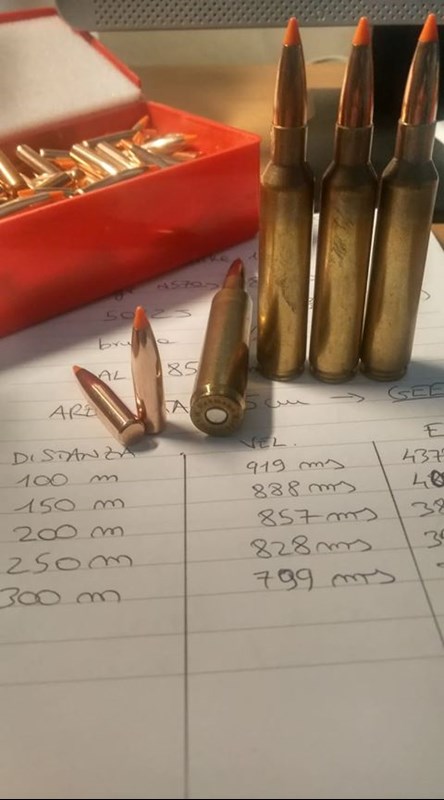 A young fallow deer, killed at 200 meters with quartering away shot, from back to forward. The bullet travelled for almost the entire lenght of the animal, being recovered under the skin of the right shoulder. Fast kill, without meat waste.

An old Female chamois, shoted at 247 meters in italian Alps, with an steep angle, after a long walk in our beatifull Dolomiti. The old female falled immediately, being the shot perfectly placed behind the shoulder, in the boiling room, just a little high.

In all of this cases i had fast killing, high accuracy , constant results.

But the ks bullet has a poor exterior ballistic. A low BC means an high resistance in the air, and a fast drop after 200 meters. This limit was so evident while hunting chamois that i decided to try another bullet.

My barrel showed to hate boat tailed bullets in the past: scirocco, ballistic tip, Sierra hpbt. All this bullet produced a bad grouping, decreasing or increasing the pressure step by step.

And there is a reason fo this: when this caliber saw the light, powders were more primitive. Their burning rate was quite different and slow burning powders were only in dreams of daygone designers. Nevertheless some of them were so farsighted to project roomy brasses: this one is a .404 jeffery necked down to 7 mm.

The problem was to achieve high velocity keeping the pressure at reasonable valiues.

Mr Vom Hofe solved part of the problem with a very long free bore. As many others in that era (like Mr Weatherby for example) he had observed that the long free bore worked as a burning chamber, were the high quantity of powder could burn completely manteining accettable pressures.

With this shrewdness the old 7x66 Vom Hofe became the most powerfull 7mm of the world in the Early '50.

After almost 70 years (yes.. was projected before the WWII and then developed after the war by Walther Gehmann) this caliber is still a vanguard.

The other face of this paradise is that a long bullet will produce higher pressure than a shorter. I have observed by measuring free bore values of different bullets, that a long boat tail bullet will engage the rifling while still deeply inserted in the brass. This will vanish the effort of Vom Hofe's design, and will blow your precious, rare brass.

On the contrary instead, a flat base bullet will engage the rifling after leaving the neck of the brass, giving to the powder all the time and the room to burn and pull.

And more... a slender, long 160 grain boat tail bullet has a short surface in contact with ther rifling. A stocky flat base bullet, will kiss the rifling perfectly, obtaining a perfect stability, superb accuracy, and a, hellish drop after 300 meters.

On the field, the KS bullet was extremely accurate, both 121 and 162 grains. The good 150 grains Scirocco was instead barely sufficient in accuracy. While the old Interlock 175 grains showed an indecent punch with good accuracy. 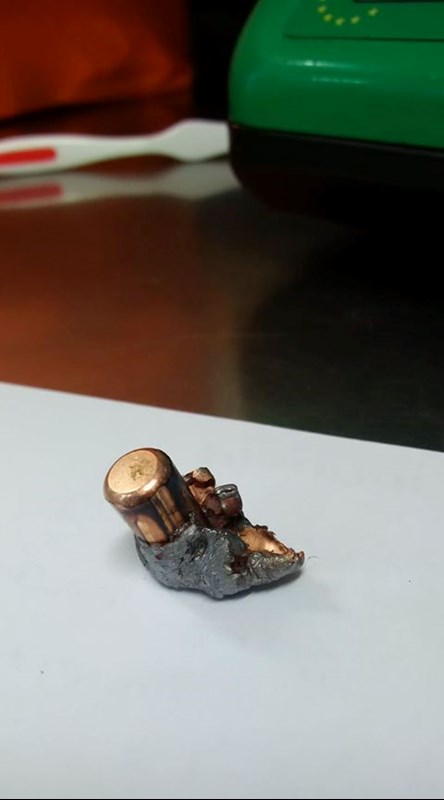 So it's evident that a modern Flat base bullet with high BC and good construction was the only way to increase the already superb performance of this caliber.

Being a 50 years old rifle, it's not advisable to ruine an elegant Mauser with a modern scope.

My choiche was a Schmidt&Bender 6x42 Klassik. So a flat traiectory was what i needed.

My objective was to obtain a drop of less than 15 cm at 300 mt with a vital area of 5cm, delivering an heavy punch at that distance. The answer was the Tipstrike bullet, .284 160 grains.

With it's high bc of .521 and a slelder design it was all i was looking for.

When finally i had the tipstrike bullets i started the developing of the hand load.

According to Quickload, it was possible to push this bullet up to 980/990ms with a 65 cm barrel.

But prudently i started with a "near to the max load".

With the initial load the bullet was near to 980 ms, with an outstanding energy of 5000 joule. I was excited by the ballistic chart... less than 14 cm of drop at 300 meters.

BUT... using the suggested OAL for the caliber, 85 mm, the results in the field were really depressing.

Just decreasing the load to a lower velocity, 965ms, finally i had what i was looking for.

Due to the roomy brass, i decided to use the N570 powder, but i have elements to believe that is too slow for this bullet; i have signs of incomplete combustion on the neck of the brasses, and probably the longer OAL assured a better combustion avoiding flyers. Surely MRP or RS60 could be the best choice for this bullet, but using a shorter OAL. I'll try again in next months.

Right now, i'm just waiting for roe deer season opening, next january, to try this bullet on the hunting field. I have great expectations, in my opinion could produce spectacular terminal effects at this velocity, with a traiectory flat enough to forget ballistic turrets and range finder up to normal hunting distance. But what is really surprising is that an old elegant caliber with a modern bullet can shine brighter than ever.