This is probably going to be one of many buck hunting articles you will read as the start of the hunting season approaches. There is something extraordinarily exciting about the inauguration of the hunting season and anticipation fills the morning of the first hunting day. The roe buck hunting season is one the most anticipated starts worldwide. In Sweden, it means we hunters get to venture out into the fog of the August-mornings to our prepared stands and spots to find that buck we have been eyeing all summer.

The management of wildlife is increasingly more difficult in my parts, as predator populations are on the rise. In the eastern parts of Småland where I hunt, the return and surge of Lynx populations have made it increasingly more difficult to select important roe buck individuals to save. On this particular morning on the 16th of August last season, I hade given away the best hunting spots to my guests and my significant other. Herself an avid hunter, she had spotted and observed a fine buck who was strolling around a patch of forest next to a wild boar feeding ground. As I was driving her out to the stand overlooking this spot, we spotted a large boar who ran right into the spotlights of my truck.

Our guests had been placed out near the fields where the roe deer are usually plentiful. Just the night before we had sat up late, sharing hunting stories in anticipation of the morning to come. For me personally, buck hunting is one of my favourite forms of hunting, but I prefer the grand bucks of nearby Öland. Here at home, the buck hunt is mostly a welcome pause from everyday life and work and all the boar hunting I have to keep up with. So that morning, I decided to take up my hunting spot at a more remote place near a small acre and farmhouse.

The fog that morning was too thick to see through, so my approach was both quiet and invisible, but as I made my way up the stairs to my stand I of course dropped my coffe thermos flask, a clumsiness that most hunters will recognize, but nothing left to do but to lay out my equipment and wait for the fog to clear. I always head out early when hunting, so I am at the scene before the first break of sunlight, both fog and darkness take a long time to clear before it is possible to spot game or take safe shots.

As vision over the field improves, I spot a deer but can not quite make out what type it is. Soon enough, the deer reveals itself to be a lone doe, but something is laying down in the grass right next to her. The doe continues grassing along however, and eventually ends up crossing the borders of my hunting ground into the adjacent property. Two wagging ears revealed that whatever was lying in the grass was still there. My gaze had wandered over to my neighbors horses, as from the grass another deer stood up and started to walk over in the direction of the doe. It was a buck, a pretty small one, but a buck nonetheless. I decided that between the Lynx and the general hunting in the area, I would have to make due with this one or leave empty handed this morning.

The allure of that first buck of the season is hard to resist. I always carry a buck call with me during the first few days of te season and I managed to get out a few calls that lured the buck into turning around and have a listen. Another couple of calls and now the buck was heading straight toward the stand. Again the roe buck, a small 4-pointer, stopped to have a closer listen and that's when i took my shot, right behind the shoulder. The buck stumbled for about 15 meters before falling down, giving off one more kick into the air. I messaged my fellow hunters to tell them of the success, they had all spotted deer this morning but just a few bucks and none of them within a reasonable shooting distance.

As there were still some hours left of good hunting and before the heat would settle in, I decided to let the buck rest before I would have to field dress him and continue my Pirsch. I took a cup of coffe, some snus and took the opportunity to enjoy the success of this buck from my hunting stand for a while first, when suddenly a dark shadowy blob makes its way out from the forest unto the field. It took a while for me to realize that the shapes belonged to a boar, a lone boar and quite large.

He approached a couple of tall oaks next to a classic stone heap that is particular to Småland, maybe at a distance of 250 meters. My Blaser in 6,5 Swedish Mauser was following every move and through the scope at maximum magnification I could determine that it was a male Keiler. The boar circled the rocks and trotted on to some hay bales out on the field and started messing with the excess plastic wrapping. He was biting off chunks and yanking it around. I had never witnessed boar behaviour of this sort and I took the decision to down him right there, not without some anxiety.

At 230 meters, I was aiming again behind the shoulder where I knew I would get off an ethical shot that would instanly kill the animal, even though I may have to trekk out into the woods to retrieve him. As the bullet struck, the boar rotated several clock-wise turns before hitting the ground. The shot was placed right behind the shoulder, but had exited through the opposite shoulder, so he had standing at an angle toward me. Again, I alerted my friends to the good news, but sadly their hunting fortunes had not improved as we approached lunch time.

We are once again approaching another 16th of August and hunting premier with the customary anticipations and hopes and I hope to have many more interesting mornings such as this to write about. Wishing you all a faboulous start to the hunting season! 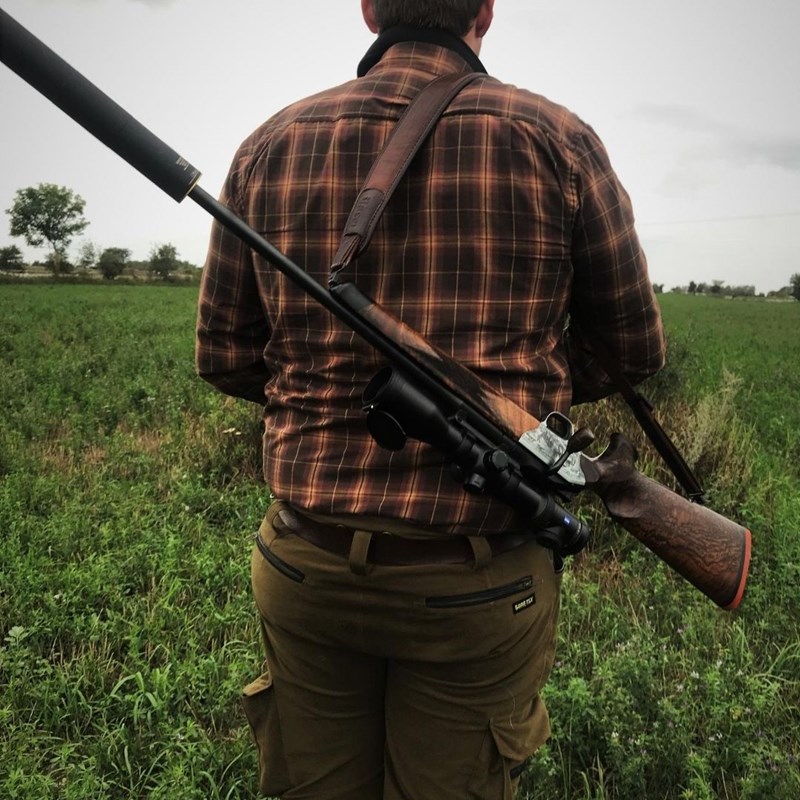