As usual before a competition, the preparations are in full swing, but of course there is something special this time. Now it is not only the best shooters in Sweden, the Nordics or Europe who participate, now it is about shooters from all over the world. So how do you prepare for this? I will not lie, I do not know, but try to think like before any other competition. In this article, I thought I would try to get you involved in how I reason before the World Cup - and for that matter overall before a competition.

At first I thought that we go through the root of my shooting, without trust in the material, you quickly create “brain ghosts”. We touched on that in the previous article, but long-term high precision is not the easiest thing and we have some important parameters to keep in mind: wind drift, precision and consistency. Wind drift is affected by speed, but for the most part by BC (Ballistic Coefficient), or simply put: how well a bullet flies through the air. If the weather conditions are unfavorable for trace, or if the targets are placed in terrain (so that impacts are difficult to see), there may be advantages to speed.

With higher energy left at hits, it becomes clearer where in the plate you hit. In addition, even if it is about small differences, it will be somewhat more forgiving in the wind. At high charges, however, the barrel heats up faster and we get mirage (heat flicker in the scope), in addition, the recoil gets worse and the range at high precision and even speed is smaller.

Normally the pressure increases with higher temperature – and then we have catch 22. Speed could have been an advantage, but 40 plus degrees is not impossible in France during the month of August, something that will be difficult to fully test in Sweden where as you know so the few hot days are easy to count.

We should still think about developing and testing our ammunition during the hottest days. I intend to invest in mediocre low speed, around 850 mps. In my opinion, it is a classic Swedish and just the right level, and with molly coated bullets we extend the range.

I have high faith in my rifles. They are disassembled in time and out of time, are always bedded and I torque all the screws, which means that it normally never changes hit position. 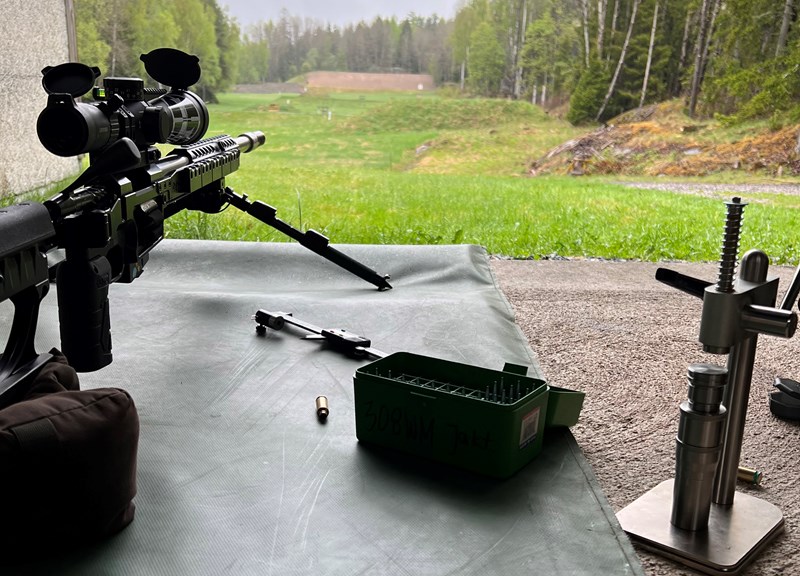 "The more I practice, the more lucky I am"

"The more I practice, the more lucky I am," as Stenmark said.

So what is important to practice? Everything of course, but mainly what you are worst at. No one gets complete from doing what they are best at! I usually try to probe my problems based on my recent performance. What did I do well and what did I do less well? After our last competition, I realized that I sacrifice a lot of time looking for targets, which leads to an internal stress and thoughts that time flies away, time I can spend on becoming more stable in position, pick up the recoil better, and analyze each shot.

Some exercises do not require a firing range or ammunition. Determine goals, find distances, change gears and adjustment, learn to work with the zoom switch quickly on the optics, take out benchmarks and so on. Draw a goal map if necessary and focus on getting down quickly behind the scope, it is a great dry click exercise.

Lately, I have focused mostly on reading the movement of the plate when hitting. I often choose a larger and a smaller target and then focus on correcting the perceived hit position from the large to the small. An edge hit is a miss if the goal is halved for the next shot, something that too few focus on. It's easy to just move on without analysis when you hit the target.

Another way to practice wind can be to turn the wind wheel, compensate for the error and keep on shooting. It gives a sense of security to trust your wind calls and fire outside the goal, as you like to start at the edges of the target in some kind of false security.

There can be some kind of mental barrier when you need to wander outside the target. Worth knowing here may also be that I never screw for wind, instead I like to put my crosshairs outside the point of impact. The reason for this is simple: it is easy to forget to zero the ballistic turrent. Wind is never constant, which means that the value is never the same anyway. My tip is therefore to save time and use the this method instead.

I also put a lot of emphasis on solid recoil absorption, especially on the first shot because it is the result of estimated wind. We want to work with a sighter and not waste half the station's shots before we find out the wind.

It's all about how much time and money we can spend. With that as a basic template, we can plan the practice shooting. And I know I'm repeating myself now, but if I have a lot at work or at home, I focus only on the most important things. If we have problems in shaky positions, I just postpone it. If my shooting been feeling stable, but time has been short, work on the go until the breaking point is discovered for negligence. You can not miss fast enough! Training is of course very individual, but I usually advocate that you work on a task until you feel confident doing it.

The best practice is match, match, match, this because a very large part is mental. We get nervous, stressed and make cheap mistakes. We may forget to fill the magazine with the right number of bullets, forget the ballistic turrent, shoot in the wrong order or on the wrong target - or all combined!

Shoot mini-matches at the club, bet something (in prestige) to bring out the feeling of competition. If you have no one to compete against, a tip is to run a bunch of burpies before you shoot your station. It gives about the same effect as nervousness and stress. The breathing becomes heavier and the "nervous shake" in position appears.

The last and most important tip is: avoid lingering a bad performance during a match. Instead, take the lesson with you, release the station and focus on making wise decisions during the next station. Do not waste energy on lost points. They can never be recovered, so invest in new healthy dates instead.

I hope that you who read this get something in mind for the courses that can help you.

Take care of each other and help each other. Invite new shooters into the heat and share your experiences, that's how we move forward. I wish you good luck and hope to see you on the tracks!