The whitetail deer as a target

White-Tailed Deer, or whitetails, are mid-sized deer that offer up a pretty large vital area for the hunter to shoot at. Whitetails are quite shy and skittish and blend in very well with their surroundings, so the challenge for the hunter consists mainly in tracking the deer down rather than achieving a good shot placement as they are quite large animals. Whitetail deer are masters of disguise and are quite silent, lest we are talking about a buck during the rut. There are many different subspecies of whitetails as they adapt to their surroundings competently. Unlike their larger family relative among the Cervidae (i.e Deer) the Moose, you can find whitetails very close to civilization and they actually benefit from the increase in arrable land that humans carve out of the wild. They are native to North and South America, but have been brought to other continents and a wild population of them can be found in countries like Finland.

Where would you place your shot on this fine white-tailed buck? Read the article and see if you learn something new that might change your answer!

For hunters who are familiar with deer anatomy, the white-tailed deer will be just as what you'd expect. There are basically 3 major vital areas that produce deadly shots when struck:

The lungs are the biggest target by far, followed by the heart, the vertebrae and finally the brain. The ideal shot strikes both lungs and the heart for a guaranteed kill, but you can expect some whitetails to still run quite a distance despite a perfect shot placement. As with most deer, the heart is situated quite low towards and behind the front leg. As White-Tailed Deer are quite a bit bigger than Roe Deer, the skelletal structure is also more robust, meaning that bullet impacts that strike the shoulder first risk deforming the bullet quite severely. This usually isn't something that prevents a good, clean take-down, but the bullet path and damage to the game can be quite unpredictable and severe when the thick bones of the shoulder are impacted first. 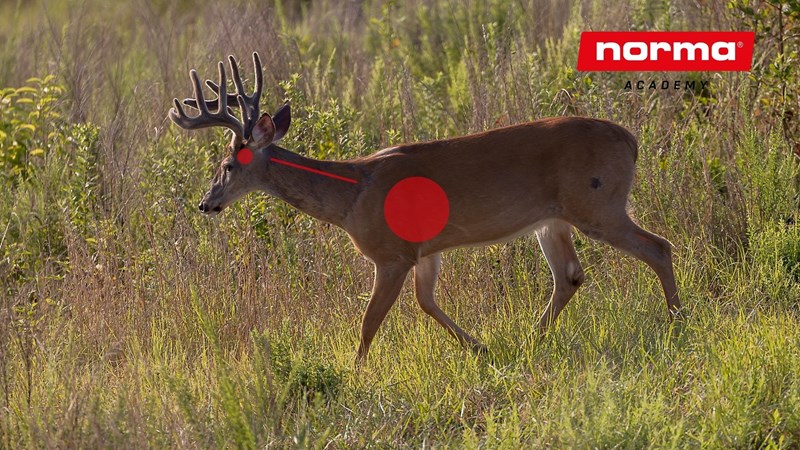 Pictured: The vital areas on a beautiful white-tailed deer buck with the antler velvet still present.

Where to aim on a whitetail

As whitetails are quite apprehensive, you will often find yourself in a situation where you have to wait for a cleaner shot opportunity to arise. The body of a whitetail deer will blend in quite beautifully with the vegetation, and their somewhat limited stature means that often times you can only see the head sticking out from over the thickets and brushes. This shy behaviour along with the propensity for whitetails to run quite long distances even after clean heart-shots means that many seasoned white-tailed deer hunters go for head- or neck-shots. As always, the most ethical shot is to aim for the lungs and heart and as the relationship in size between these two holds is quite large, it is advisable to go for the broadside. 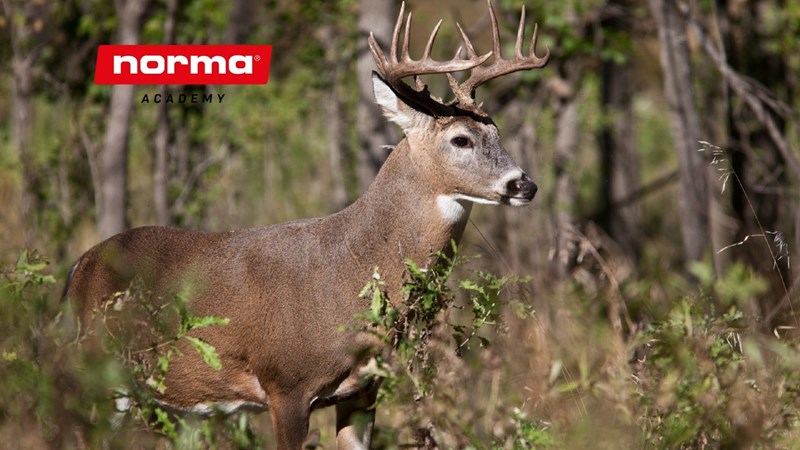 Pictured: This buck is peaking out from the thickets, offering just a small enough opening for a clean broadside hit to the heart and lungs.

Another thing to keep in mind is the angle of the animal. Whitetails are constantly watchful and on the lookout for danger, keeping their heads on the proverbial swivel. With their formidable camouflage, this means that it can be difficult to judge the bullet path that a fired shot will take through the deer's body, especially at a larger distance. Remember the clock, for a clean broadside hit the animal should be looking straight at either 3 or 9 o'clock. Looking at 12 or 6 o'clock means either a rear or frontal shot. While a rear shot is obviously completely unacceptable, some seasoned deer hunters opt to go for a frontal shot to the chest. Meat damage and knock-down effect are a concern here though, as the bullet will not travel through lungs & heart, but rather strike the heart and then it is quite uncertain how far and in what direction the bullet will continue to travel.

White-Tailed deer offer some of the most beautiful antlers in the animal kingdom and are a dream trophy for many hunters. Even weaker bucks can be quite astonishingly ordained. Thus, it would be a shame to ruin a beautiful set of antlers by aiming for the head, as the skull is quite frail and your taxidermist would have to perform a miracle so save a trophy when the head has been impacted. Deer brains are notoriously small as well, and it is very rare for a whitetail to remain still for long, which makes for a really tough shot.

Whitetails will behave very similiar to Roe Deer, being more solitary than Reindeers or Red Deers that often form larger groups or herds. They will not be quick to come out in the open, rather they will venture along the edges of proctecting woods while scouting the area for danger. Often times this means that you will look through the glass at a deer that is partially covered by grass, leaves and branches. These small obstacles can have a major impact on your bullet and it is advised to allways ensure a clean bullet path to your target before pulling the trigger. A signature for the whitetail deer versus other species of the deer is the namesake white tail that the deer will raise like a dog's tail when sensing accute danger. Similiar to how beavers use their paddle tail to alert and signal danger, the whitetail will flash the tail and bolt away.

They go through a rut during which the males compete for mating rights and pester the poor does for attention. The whitetail rut is quite a bit more action packed though as the bucks are larger and especially in areas with proper climate and dense populations, the rut can become very intense. 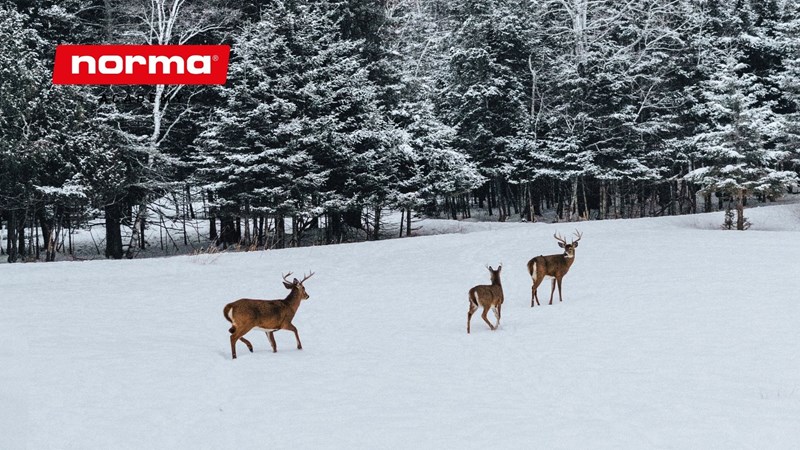 Pictured: During periods of strong cold or other distress, most deer species including White-Tailed Deer will flock together as a mechanism of survival. 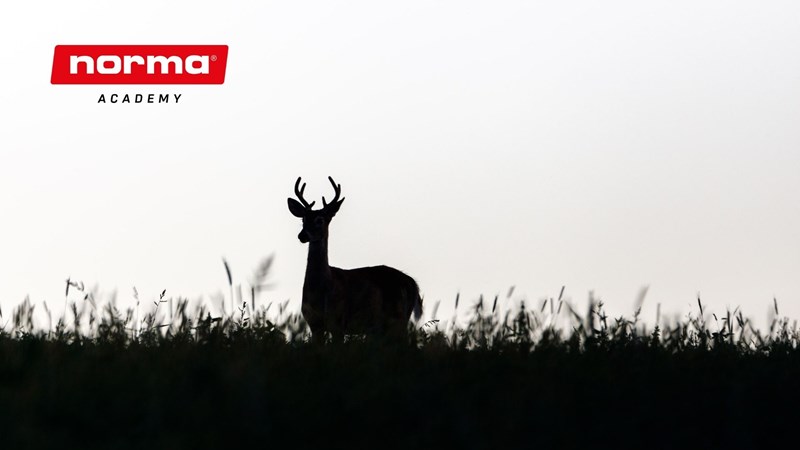 Pictured: The shy whitetail buck will not easily venture out in broad daylight without feeling very secure. Could you identify this buck under the pressure of a hunt?

As the whitetail is a mid-size deer, the apropriate calibers for other species like fallow deer or red deer are apropriate for a whitetail as well. It is not a particularly tough type of game, but their anxious nature and strong sense of flight often means that they will travel a bit even after perfect shots. This means you should consider not only the caliber but also the type of bullet you are using. A big bore will not allways offer the most efficient impact, despite the higher energies and weights involved. A smaller caliber, with a higher velocity and a more aggressive shock-effect will probably be a better choice for the whitetail hunter. Between 6.5mm up to 30-caliber (7.62mm) is probably going to be the ideal caliber range for most white-tailed deer hunters. As for the bullet, an expanding bullet will be the ideal choice to offer maximum effect. However, there are many different types of expanding bullets (click to read the article) and so there is also a degree of personal preference involved. We have put some recommended selections in the bottom of this article. 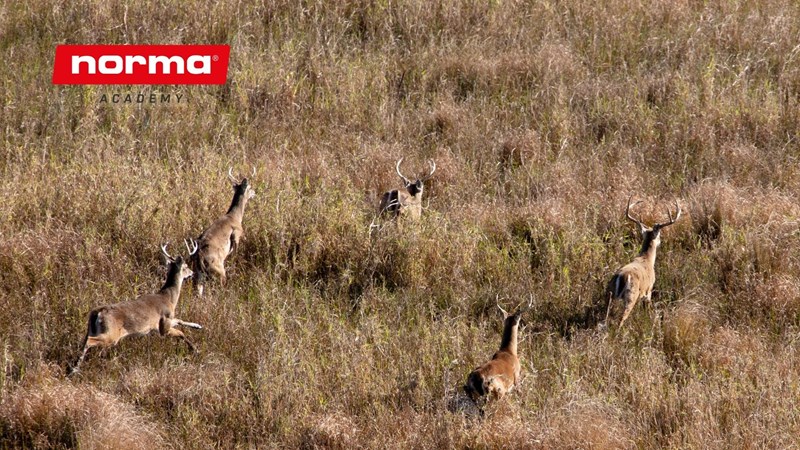 Pictured: A group of whitetails displaying how well they blend in with their environment. It is not typical for these territorial animals to roam together like this.

It is time to review what we have learned about the optimal shot placement on white-tailed deer.