The red fox and its ability to adapt to a variety of food sources has made it a nuisance in rural areas as well as in our cities. Many surveys have been done over the years to try and establish the fox population in the UK. It’s difficult to say how accurate the results are, but estimates are that we could have over 300,000 in the UK. The last 2 years appear to have been great breeding seasons for foxes with the average litter size of 3-4 cubs. Although they stay underground for the 1st few weeks, the cubs are soon on solid food and can often be seen playing around the den entrance at an early age with both the dog and the vixen out hunting to feed the hungry litter. It’s also not unusual for there to be more than 1 vixen helping to feed the cubs. By the time the cubs are 6-7 months they have grown into the size of an adult fox and by 9 months they will be moving on to find their own territories. The young Vixens will usually be breeding before they are a year old. 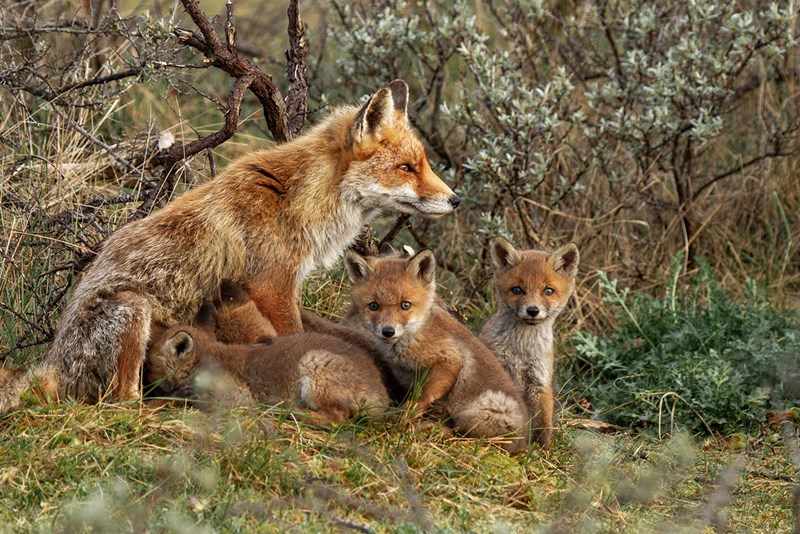 Once they leave their parents and find their own territories, the mature cubs may well become a problem to gamekeepers, farmers and owners of small holdings. For farmers, lambing is always a problematic time with lots of vulnerable lambs in the fields, as hard as these farmers work it’s simply not possible to be on watch 24/7. It is similar story for gamekeepers, poultry farmers and anyone keeping domestic fowl. For example, if a fox manages to get into a chicken shed it can decimate the entire stock in one evening, not just killing one chicken to be eaten, it will normally kill many more which is referred to as “surplus killing”. A fox will often return to the crime scene later to pick up some more of its earlier kills.

Gamekeepers have a year-round job trying to control foxes, not only for when their birds are released into the release pens, but also in providing protection for all wild ground nesting birds, which includes games birds of all varieties. If a fox gets into a release pen it can cause devastation killing many game birds in one sitting. It takes a significant amount of time and effort by keepers to get to the point they are able to release birds in their pens, whether they have purchased eggs, day old chicks or poults. There is of course a financial impact of fox predation, in addition to the keepers labour costs, there is of course a more immediate financial loss, eggs will have cost 30-40p, chicks 90p-£1.30 or poults £4-£5 and with some premium sporting estates charging upwards of £45 +VAT, this can lead to thousands of pounds worth of lost revenue.

Another problem for the countryside is the release of foxes. I have heard of gamekeepers on various estates where they are of the opinion foxes are released on a regular basis. The people involved with such a practice are certain to think they’re doing the right thing at heart, but again this can cause a whole lot of pain for these estates and farms where this is taking place, especially at the time when birds are being put into pens.

Urban foxes in our cities are also becoming quite common these days, with the throwaway lifestyle a lot of people live now there is always plenty of food for them to scavenge on the streets. The urban fox has become more accustomed to the presence of humans and this is starting to show in how bold they are now becoming, with cubs born in urban areas under sheds, decking, or disused out-buildings. It almost seems that they have been brought up alongside humans and have lost the fear they once instinctively had, which does them no favours. It is common to see a lot of urban foxes with mange which is caused by a highly infectious mite that burrows and lives under their skin, a lot of foxes recover from this but it can also be fatal to many. This can also be passed onto domestic pets. 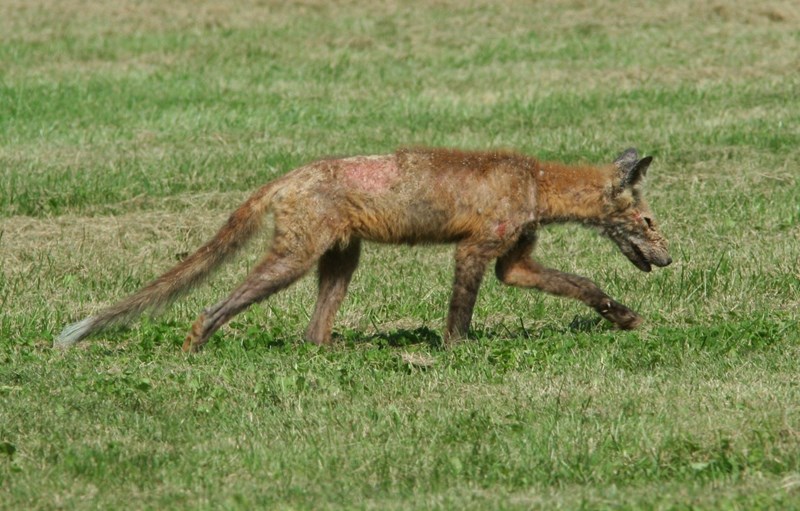 Controlling urban foxes comes with its own headaches. Some pest controllers chose to use traps, and some choose to shoot them, much depends on the backdrop to the area, given that safety is the most important consideration, along with respect for any neighbours who’s opinions may differ. If your plan is to shoot an urban fox it can take days of baiting an area with food in order to entice the fox to an area with a safe back-stop. A favourite method is to use some straw bails to create a safe back stop and take the shot from an elevated position, such as a first floor window. If using traps or snares, these need to be of a certain type and must be checked on a daily basis in order to comply with current legal requirements.

There are lots of methods of rural fox control here in the UK, one method was hunting but 2004 saw the introduction of the 2004 Hunting Act and this means that foxes are no longer hunted on horseback with a packs of hounds, however, a fox can still be flushed from cover with a maximum of 2 dogs to be shot by standing guns.

A lot of game keepers and farmers still snare foxes as well as shoot them. The snaring of a fox comes with it a lot of legislation to make sure that methods used are humane eg: height, type, size, free running, set stick, anchor and most importantly they should be checked at least once a day. If a fox is caught it should be dispatched by rifle or shotgun. 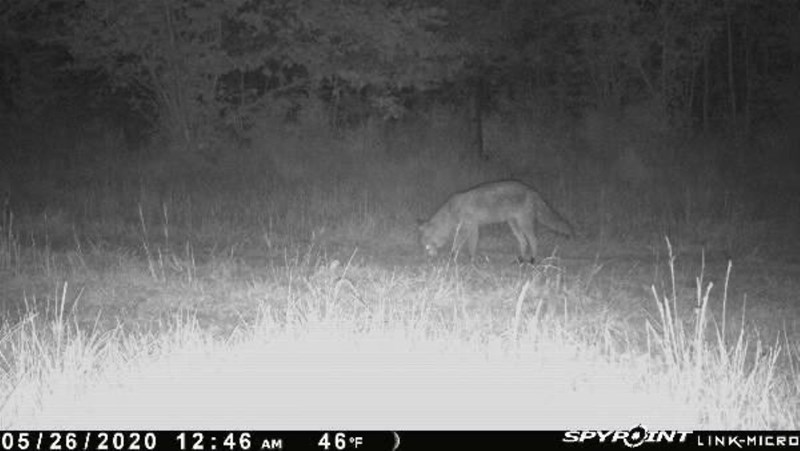 The shooting of foxes takes a variety of forms, with many different methods and approaches employed to do the job as there are tools to do it. There are numerous calibres that can be used from shotguns to rifles. The most popular calibres for foxing seem to be .17hmr, .204, .223, 22-250 and .243, but there are plenty of others that will also do the job very well.

Methods have changed a lot in recent years from the old days where you went out with your mate and he had the lamp and a large, heavy battery pack, to nowadays where a lot of people are using infra-red night vision or thermal. The introduction and continual development of this equipment has revolutionised the fox shooting world. There is now so much choice out there from dedicated night vision or thermal scopes to add on-devices which attach to either the rear or front of your scope. This now means foxing is no longer a two, or even three-man job, people can go out solo and not have to rely on friends going out with them to drive and lamp. It is a similar story for spotting foxes, most people now seem to the have a handheld thermal monocular spotter or a set of thermal binoculars. The days are long gone when you used to rely on getting the ping of a set of eyes in the lamp. With all the modern technology and all of the modern devices on the market you would think that the fox population would be in decline, but every year there seems to be the same number around, if not more. 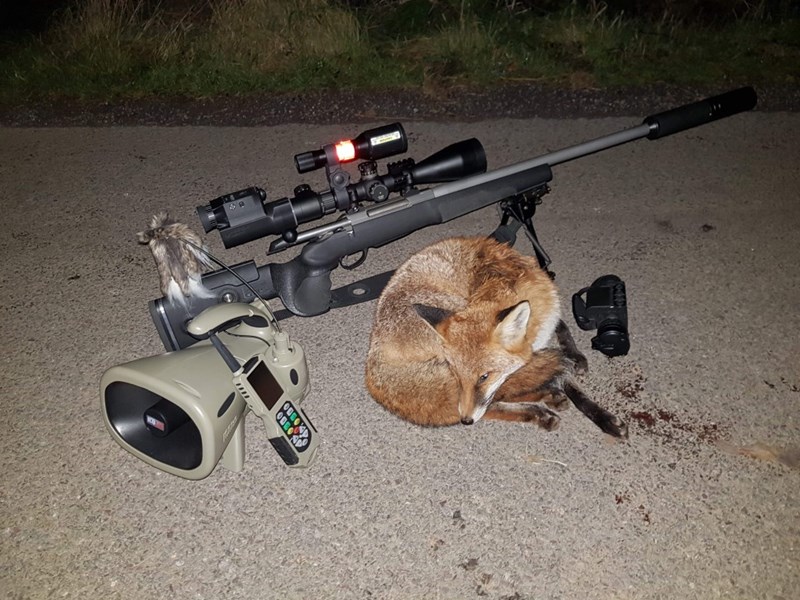 One of the most popular methods of luring a fox is sitting out and trying to call it. The idea is to get the fox to come in to a shootable position and a comfortable distance to shoot, but using an electronic caller can be a work of art in itself. A lot of people ask what calls are used and a good rule of thumb is to try and mimic what wildlife you have on your ground, there is no point playing pheasant distress if you don’t have any on your land as that’s not a normal meal source for Charlie. The fox has an incredible sense of smell, so obviously the perfect wind direction is blowing into your face so that your scent is not drifting out on the wind. It’s the same rule of thumb for your caller, put it down wind from you. Always remember not to play your caller too loud, always start off on the quieter side; if you have a fox close by you do not want to spook it. If you have no luck after 5-7 minutes turn it off and leave it quiet for 10 minutes, then try again. Try increasing the volume a little after a few goes with the same call, if you have no luck you then could try a different call. Electronic callers will not work every time you go out and its worth carrying a variety of mouth calls in your pocket. If you are out on foot, you will have a rifle over your shoulder, shooting sticks in one hand and a spotter in the other hand, you’ll have no spare hands left to carry a large caller! The mouth calls always live in my pocket for the nights where you are out mobile. The cream coloured Faulhaber hen call works great around harvest time and when the grass fields are cut, and the black reed call is used to create a lot of different sounds so it covers more than one base. The Tenterfield call produces a fantastic raspy sound and is preferred by a lot of people and the sound can travel a long distance. 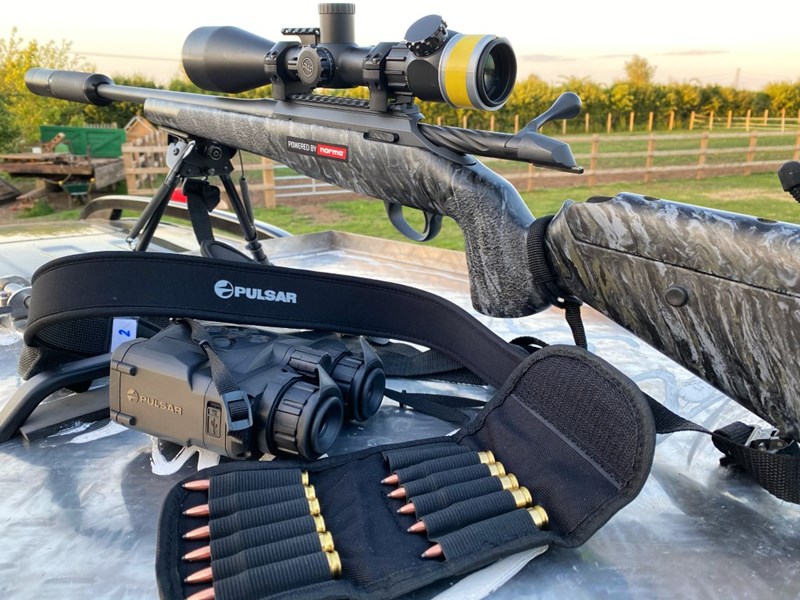 Another method of luring a fox in that has become very popular is using bait stations, especially for that wily fox. A method that usually works is putting cat or dog food smeared into the ground and a few dog biscuits spread around to try and keep them in one place for a while searching for their food. This works well for the IR (infra-red) shy fox as its focus is on getting its dinner rather than the red glow from the IR. Bait tube/pipes work very well and they’re so easy to make - all you need is a piece of drainage pipe, bury the pipe into the ground a good foot down, cut some holes in the pipe and bingo, your bait station is set up. Using a nice strong wooden stake nearby, install a trail camera on it facing your bait pipe and you will soon see what’s coming to visit and at what times of the day or night. Others use simple methods like a metal stake knocked well into the ground and then you can tie rabbits or pigeons on to it with some bailer twine or rope. These days you even get trail cameras that will send pictures straight to your mobile phone and save you having to go and disturb the land to take SD cards out and check them, which again is a large benefit to the farmers, gamekeepers and pest controllers out foxing that work long hours. 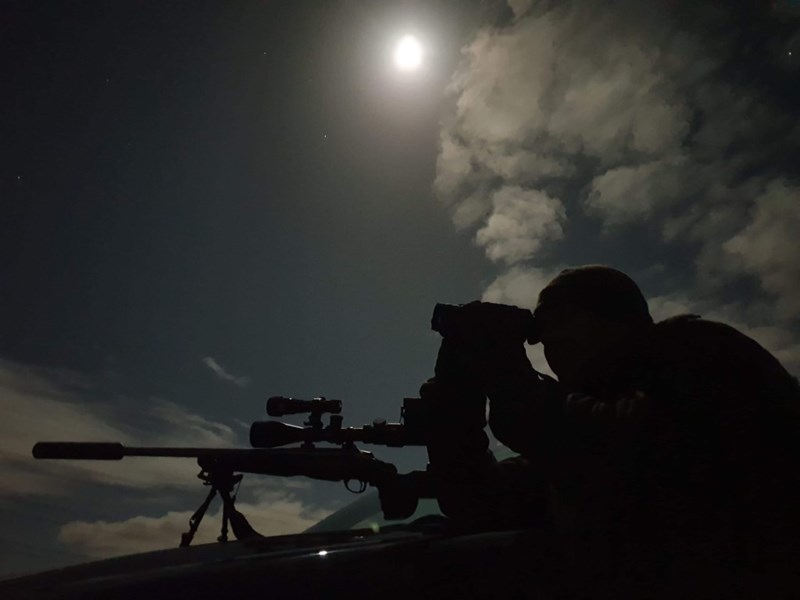 My favoured approach to foxing on the estates and farms I shoot on, is to sit quietly in my fox box, that said it can sometimes be more productive to be more mobile. It’s a good idea to have options available, a fox box is a welcome retreat if the weather is not being so kind! Take time to get to know your land and what works best for you. My personal choice of gear is a Tikka semi-custom .204, fed with 40 gr Norma ammunition, a Wildcat moderator, Sightron S-tac scope NV add on. I spot all my foxes with a set of Pulsar Accolade binoculars. In my view, thermal has been a game-changer for the pest control industry over the last few years, a trend which is set to continue with better products being made available to more people.