”It’s all about eco and precision”

“As a chef, I think I have a different view of the hunt. Its not about the kill. Its all about the meat.” Henrik Norström is a well-renowned chef, and also the president of Bocuse d’Or in Sweden. He is the perfect representative for Norma’s new, lead-free bullet ECOSTRIKE which is designed for the highest precision and the environment and the meat quality in focus.

”To me, the meat is the finest trophy. It’s a noble commodity, running past me while hunting in the woods. This approach means I never take the unnecessary shots. I play it safe. And when I do shoot, what I bring down will not just be something to eat, it will be something I present to my guests with pride. Transforming my buck into a plate of braised venison shoulder with green juniper berries, pickled chanterelles and artichoke puree is my way of honoring the animal.”

What Henrik Norström does, he does with ab- solute precision, no matter if it’s cooking or hunting. The silver medal in the Bocuse d’Or says it all. It’s the Formula 1 of gastronomy

- the most excellent anyone can do when it comes to cooking. Henrik knows what it takes in terms of precision to participate. He is one of very few Swedes to make it in the international contest, and he now works with sifting out new Swedish candidates.

”Precision to me as a chef is about having solid knowledge about the raw material I work with. When I hunt, I go about it with that same precision, and with ammunition that yields as little meat spoilage as possible.”

“Game is a truly great, local commodity, the finest, most tender, most flavorful meat our country has to offer. That’s why the meat itself was my own reason to start hunting”, Henrik says. He had been working with game on his menus for many years, but felt he knew too little about the meat.

”I bought my game and could only note how much variation there was when it came to the quality. Why was that? It wasn’t until I started hunting that I fully understood all the factors involved in affecting the flavor and tenderness of the game. The most vital detail for the meat quality is of course where the shot is placed. But I have also learned with what precision the game must be treated after the shot, because everything has an impact on the flavor. The hygiene at the evisceration, the temperature, the hanging, the tenderizing.” Henrik has also explored how the flavor varies with the season. “A roe deer brought down in the early fall, after having eaten grass, nutritious herbs, and built a layer of fat, tastes far better than the meat from a lean roe deer brought down during a hard winter, after fighting for its survival and losing much o fits energy. This kind of deep knowledge is only attainable by someone who actually hunts, Henrik states. Among hunters there’s a lot of talk about equipment, but very little about commodity and meat quality.”

At Lux Dag för Dag the methods for game are sustainable. The restaurant takes care
of the whole animal, nose to tail. The meat is tenderized in the restaurant’s own meat hanging fridge for the best possible result. In addition there is always a story to tell about the commodity the guest is devouring. On the menu, it might say:

”Our goal is to be able to serve game dishes to our guests, with pride and love, everyday.” In Henrik Nordström’s opinion, chefs in general know very little about game. “Usually the menu just says deer. The natural thing would be to actually tell if it’s fallow or red game that’s being served, the two being to- tally different kinds of game with different properties. Plus it’s interesting on the menu to talk about whether it’s a hind, a buck, or a calf you’re eating. The flavor is so different.” 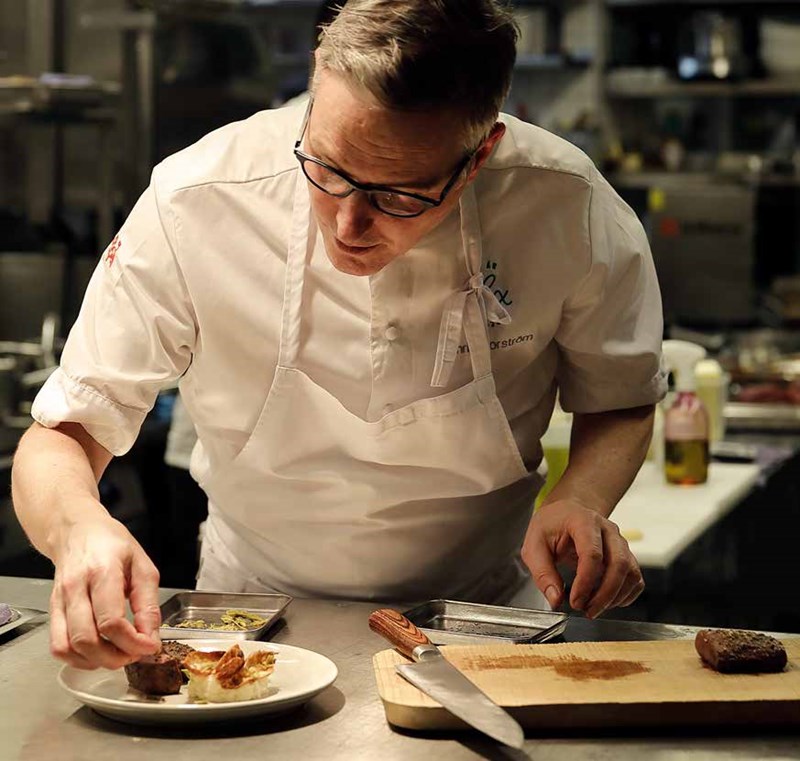 Henrik Norström has won the silver medal in the most prestigious international gastronomic competition, the Bocuse D’or. He is now president of the Swedish Bocuse d’Or Academy, leading the work with sifting out Bocuse d’Or candidates and coach them for the competition.

Henrik is a jury member at Bocuse d’Or, which is the world championships of cooking. He is also a jury member at Chef of the Year, Sweden. Henrik was in charge of the dinner at the wedding of H.R.H. Prince Carl Philip and princess Sophia at the Royal Castle.

Henrik’s restaurant Lux in Stockholm had a Michelin star, but a few years back he decided to transform the restaurant into Lux Dag för Dag, with a focus on seasonal produce. Here, Henrik’s own game is often on the menu.