This year's moose hunting premiere began according to old tradition. Breakfast was enjoyed next to a fire while I planned where I would go with my hunting dog Asti, and the hunting team planned for todays hunt. As soon as the guys announced that they were in place, I released the dog. In less than five minutes he was barking a few hundred meters away, and after 10 minutes of great dog work, a four-pointed bull moose was lying on the ground. Not always a moose hunting premiere is completed so quickly, but a day I will never forget! From this experience to another, a tasty one. Let me offer you a recipe for butter-fried moose top round steak with tasty complements. 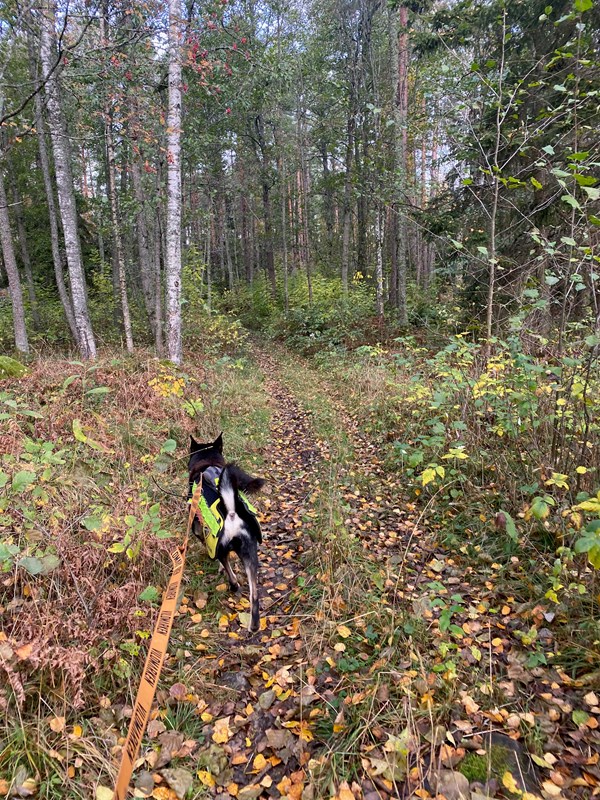 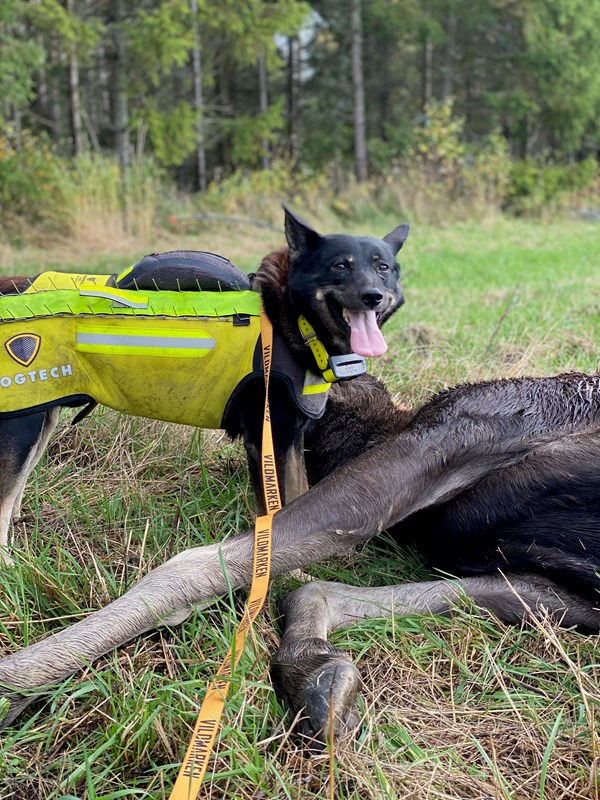 Here's how you do it:

Start by chopping a yellow onion and place on a saucepan on the stove with a little rapeseed oil in and brown the onion lightly, add the wine, let it boil for a while before you go in with the game fond, to finally go in with the cream and milk. Now you have in the grinded rosemary and dried mixed peppers. You can, if you want to chop the stalks from the parsley and bring to a boil. But be careful that it does not boil over, a tip is to have a large saucepan of for example 4 liters to avoid this. Now let this simmer down to half, about 5-6 dl, this takes about 1 hour. After that, mix the sauce smoothly in a blender or with a hand mixer, put on the stove again and soak in at least 100 g butter, but preferably double (!). 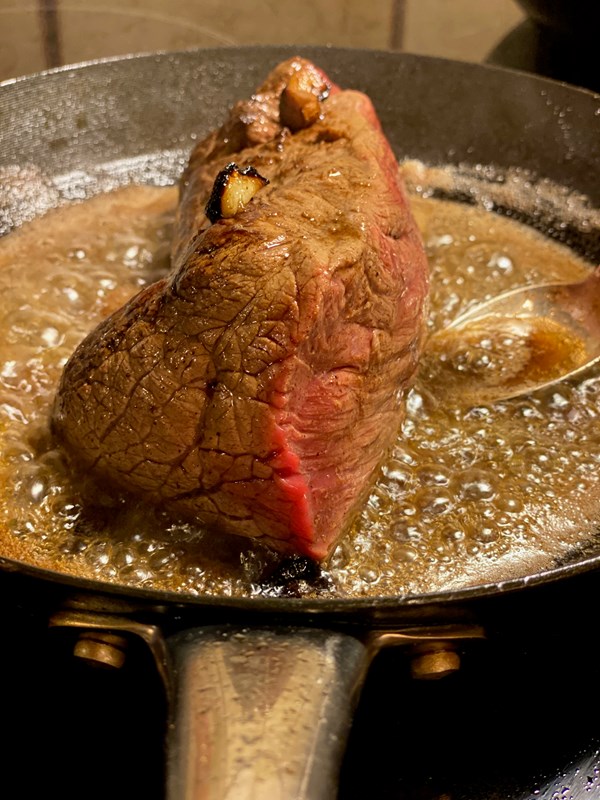 In the meantime, you have time to trim the meat, divide the cut into two to three equally wide pieces, like a fillet. If the meat has been hung properly, it will not liquefy, but if it has not you may need to wipe it off with some paper. When the pieces of meat are dry and the pan is warm with butter, salt the meat abundantly and brown it immediately on all sides of the pan together with 5-6 divided cloves of garlic until it has a nice color. Let the meat rest for a while.

While the meat is resting and the sauce is reduced, you grate the potatoes and the other yellow onion and chop almost all the parsley, but save some of the nice bouquets to decorate with later. Mix the grated potatoes you have in a bowl with salt and pepper and the chopped parsley, shape round cakes using a mold (or do it by hand), lightly press the cake together so it settles, bake in the oven for approx. 200 degrees for 1,5 hours.

When there are about 30 minutes left on the potatoes, place the meat in the oven and let it stand until it reaches an internal temperature of 54 degrees Celsius. Note that the meat will continue to increase by about 4 degrees when you take it out, and you will then get a meat that has stayed at about 58 degrees (medium), which suits most people.

The last thing you do before serving is that you slice up the red onion and fry it in a little oil in the frying pan, as well as butter the chanterelles and decorate with parsley. 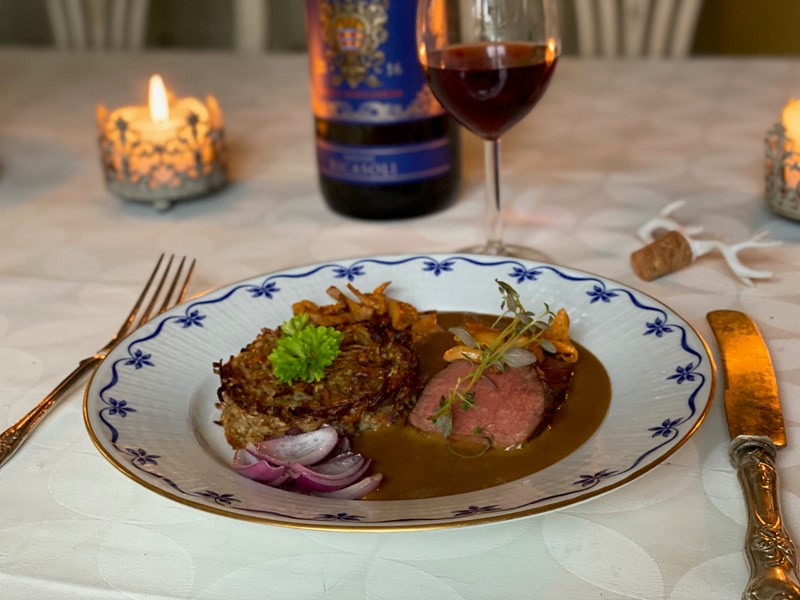 Feel free to serve with a full-bodied red wine for this occasion and proudly tell about the journey from field to table.

Good luck and have a tasty meal!

Let our Norma Academy member, BBQ master and hunter Jimmy Stening offer one of his delicious game recipes. This time he tempts us with roasted venison silverside with chanterelles, fried potato crisps and truffle cream.

This Friday we offer a capercaillie recipe

This Friday recipe menu consists of a wild version of a classic Swedish dish.

We are in the middle of the moose hunt here in Sweden. So this Friday we would like to offer a recipe on moose.

This is a classic dish from the farms out in the Swedish country.

This Friday we are making minced venison beefs. In this recipe the meat is from fallow deer but of course you can use whatever minced meat you have at home.

Recipe: Make your own Christmas ham on wild boar

Has the wild boar hunt gone well? Wild boar ham adds an additional dimension, a tasty one, to the Christmas table. And just like with successful hunting, it is important to plan well, but we all know how good the result will be. Merry Christmas!

The season of dinners with family and friends is here. During the year, we have shared a lot of tasty recipes from our talented chefs here on the “From Field To Plate” page. You can find them all in our archive. Today we will focus on wine instead. Jörgen Edlund at the wine agency Top Note Wine will share his tips on how to think when choosing wine for different types of game.

This golden and delicious dish is a classic, not least for hunters and others who enjoys to prepare game. Roasted turkey is easy to cook and makes you an instant favorite among the guests!

This soup gives' warmth in the body after a cold day in the woods.

This Friday, Therese Tillman serves pulled pork. It requires a little preparation for the meat to get extra tender. In this recipe a Sous Vide is used, if you do not have one it is of course possible to cook the meat on low heat in the oven.

Cabbage pudding is a classic dish in the Swedish kitchen. This Friday we offer a variant with red deer.

Beef Rydberg is a classical swedish dish. This Friday, Therse Tillman, who has a penchant for low-fat and climate smart venison, puts her special touch on the classic dish by using moose instead of the original recipes beef tenderloin.

December is here and dinners with family and friends are just around the corner. This Friday we offer a tasty fallow deer recipe by René Jantzen.