A capercaillie hunt at dusk

Well, these snow-covered marshes have been in short supply in recent years, with winters seemingly ever more delayed – but there are still birds to be found. This year, I have been out since the start of November and enjoyed good fortune with my hunting. Black grouse can usually be found among the birch buds, and if I don’t see them at first, it’s usually possible to locate them by their distinctive cackling. On the other hand, capercaillie males have been conspicuous by their absence and, in the search for this year’s first capercaillie bird, on one occasion I tried a new hunting ground. Here, my Finnish lapphund raised a number of capercaillie birds that were sitting on the hillside among the lodgepole pines, but they appeared to fly straight into the forest without offering a chance of locating them again. This is the drawback when there is a lack of snow and the capercaillie can find plenty of grazing on the ground.

But shame on anyone who gives up. After that outing, I decided to try a ground that was very familiar to me, where I hoped to find a grazing capercaillie birds. There was adequate snow and so, full of hope, I set off on my skis towards a safe bet in the hunting area: a belt of marshland running in a line along the edge of the field where I’d missed my last capercaillie of the previous year. That was a clumsy error, where I hadn’t crept forward far enough and simply fired into the edge of a snowdrift a few metres in front of me. Carrying that memory, I was out for revenge.

I skied in the direction of a small island of pine trees, where last year I’d seen three fine-looking capercaillie males in the dusk light. Once this was well in view, I scanned around with the binoculars but, seeing no black silhouettes, continued to advance before suddenly stopping dead. A male capercaillie flew out of the island of pines, passing right over my head before continuing in the direction of another marsh. I skied down towards the island of pines, carefully scanning in case any more were lurking there, before then deciding to try searching for the one I’d just raised. I had a pretty good idea of where he had gone and, after an educated guess – which proved absolutely correct – I saw him at a distance of 460 metres. I took off my skis and began to sneak up in the forest edge until I was within range, all the time aware that he would not be lying there calm and would still be alert after I’d raised him the previous time. Finally, I realised I couldn’t sneak up any further without completely giving myself away, so I lay down to work out the distance. 180 metres – perfect!

I loaded up the gun, screwed on the sight and fired. Missed?! The only explanation to this could be too much haste in setting up the support and a poor release of the trigger. The capercaillie gave no sign of injury, but rather flew onwards, apparently unscathed, and I was left standing there like a question mark. I inspected the ground around the pine trees without finding the slightest sign of a hit and skied stroke by stroke in the direction the capercaillie had flown while my dog searched the area. There was no doubt about it: I’d messed up – again. I began to ponder whether this area, and this with me and capercaillie birds, might be cursed and so I decided it was time for lunch. 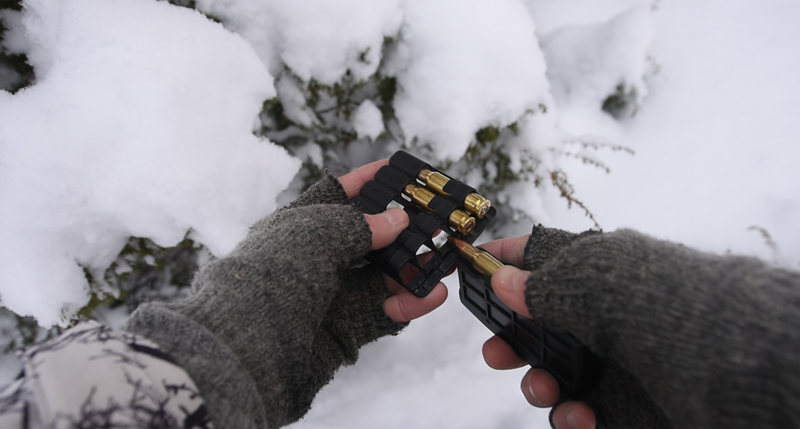 After lunch, I skied onwards, kilometre after kilometre, without seeing so much as a feather, and began laying plans for the dusk hour. You see, this was the time of day when I had seen most capercaillie, and – I hoped – the same would be true now. As the time approached 2 o’clock, my plans were in place to ski the same stretch of marshland that I had hunted on during the morning, either until I found a capercaillie or darkness began to fall. But things continued in the same vein as before, and it was all quiet on the marshes. Just as it was time to start thinking about skiing back to the car, I had a sudden impulse to search one final marsh – the very same marsh where, last year, I’d ended the season by firing into the snow.

Resolutely I skied over the first marsh, aiming for the small strip of forest that separates the two. I moved in under the birch that lay half collapsed over the natural passageway and, with calm skiing strides I advanced enough to be able to start scouting out the treetops. There was nothing there. I slowly advanced a few more metres to get a better view, but still no capercaillie. Then I veered slightly off along the right-hand edge so that I could see more of the marsh, and it was then that he suddenly appeared. There he was: powerful and assured, as only these primeval birds can be. I raised my hand to signal Dimma, my dog, to stop, so that she would know what was going on. She sat behind me as I carefully unfastened my skis and drew my gun from the bag. After slowly placing the rucksack in the snow and adjusting myself, I worked out the distance and checked against the telescopic sight before calmly squeezing the trigger. The capercaillie cascaded down in a cloud of snow and, with a broad smile on my lips, I popped my gun back into the rucksack and skied onwards.

The curse has been broken. Just a few metres from where last year I’d ended my hunt for capercaillie with an ill-tempered miss, I’d now gained my revenge and, in the blue dusk light, I put on my head torch while carefully securing the capercaillie to the rucksack and skiing back to the car.