My shooting journey began almost 5 years ago, summer 2017 to be exact, when my hunting license got approved. After countless hours of surfing and carefully reading columns of information on google, the choice of caliber was clear. Not to anyone’s surprise probably, it all started with the Swedish cartridge in 6,5x55 SE. 6,5x55 SE is a classic caliber to start with as it’s been used in both field and range shooting since forever which meant there was a lot of information to find. Thus, my choice of rifle may not either be particularly surprising for a newly trained shooter - Tikka T3x Varmint. I was told, by both Google and acquaintances in the sport, that this rifle was great to start with as you get a lot of quality for the buck. Also, Tikka had already become very popular and manufactured many after-market products for their systems. On top of the rifle, I chose a Kahles K624i 6-24x as scope, and then my gear was complete.

As soon as my licenses appeared in the mailbox, I had my first visit at the Walter Borg store to procure a nice mix of ammunition. Immediately I realized how fast you run out of ammunition so two days later I borrowed a simpler reloading equipment to start hand loading the cartridges myself. Since then, I hand load all my ammunition. Partly because the loads need to be consistent, but mainly because it must be done fast. Today however, I have a much more sophisticated place to work and a lot more finesse in the craft. 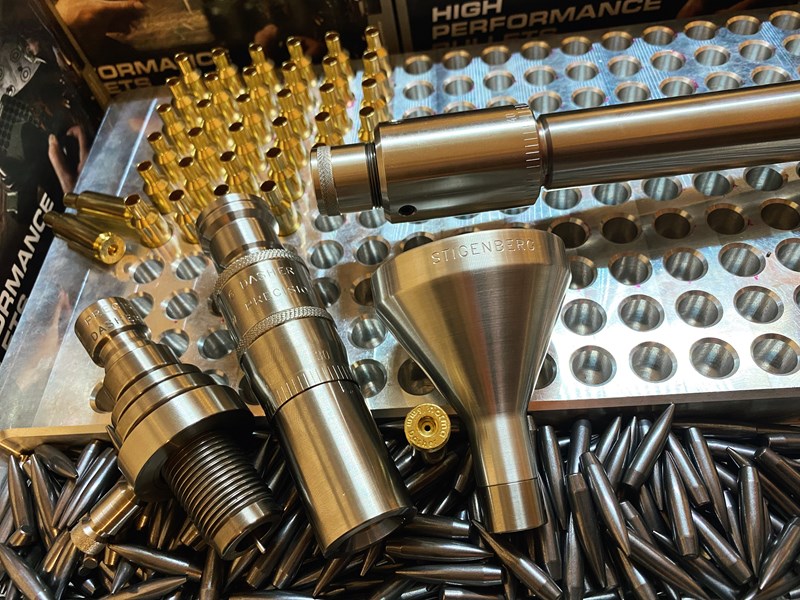 Every caliber has its charm but a multimagazine together with 6,5x55 SE is sort of black magic since no finished solutions are to find. On my second competition I remember how I started to realize that my 6 months old rifle maybe wasn’t entirely suited for the type of shooting I practiced. I wanted to get rid of the recoil and get my hands on a stock with more adjustment capabilities. So, in the car ride home from the competition in Haparanda, Sweden, I ordered my first custom made weapon from KS Arms in Canada.

The choice of my first custom weapon was a 3-lug short action bolt with two 6 mm barrels and my initial contact with gunsmith Fabian Wallin, F.W Precision, was established. We decided that 6XC was the right way to go since 6XC is a precision caliber and covers a big velocity range with 308 boltface. Also, it didn’t require any work with the cases since they already existed in NORMAs product range and was as easy to shoot as 308.

The choice of 6 mm caliber fell naturally since NORMA Diamond Line had served me well in 6,5 mm. I had previously tried a bunch of different bullets from various manufacturers but never thought they performed good enough, so I bought a package of factory loaded NORMA Diamond Line Range and shot a series of 10 shots at the spread of the size of my thumbnail at 100 meters. After that I’ve never looked back. NORMA Diamond Line in 6,5 proved itself to be the right choice and the best documented series I’ve shot in distance is with 6,5 NORMA DL – 5 shots at 1175 meters at an 18x22 target (if I remember correctly) at Livgardets Pappmålsskytte.

Since I started to hand load, I’ve always known that load development may be required when a batch changes. To avoid that I bought bullets, powder and primers to last an estimated barrel life. After that, the competition barrels would be considered “dead” and only be used for practice. I got my hands on 4500 bullets, 2250 per barrel. The first barrel had, at time for retirement, delivered +5000 shots and kept a good precision. The reason for it being taken out of use was that the weapon was sold with only one barrel zeroed that never got used on competition.

As a shooter, I’m always looking to evolve and that is hard to do without trying out new things, so after one season with 6XC I decided to try a new barrel – 6 mm NORMA BR Ackley Improved. Already then, my wish was 6mm Dasher, but the time required to fire form made me not take that step at that time.

The reason for the switch is simple – I’m a slow shooter and my biggest opponent is recoil. Also, the hotter your load is, the harder it is to keep precision over time. On our games we shoot between 140-200 shots where precision and speed are equally important throughout the competition. The important factor is therefore to make sure that all the cartridges are consistent and perform the same way. I shot my 6XC in low speed and decided to chamber the new barrel after new circumstances and knowledge. My first test involved shooting ”naked” bullets, that is non molly coated bullets. I quickly realized that the barrel had a hard time keeping the same speed throughout the competition, so I went back to molly coated bullets and dropped in speed even more. Since then, my average speed is somewhere at 825 m/s, previously 860-870 m/s. 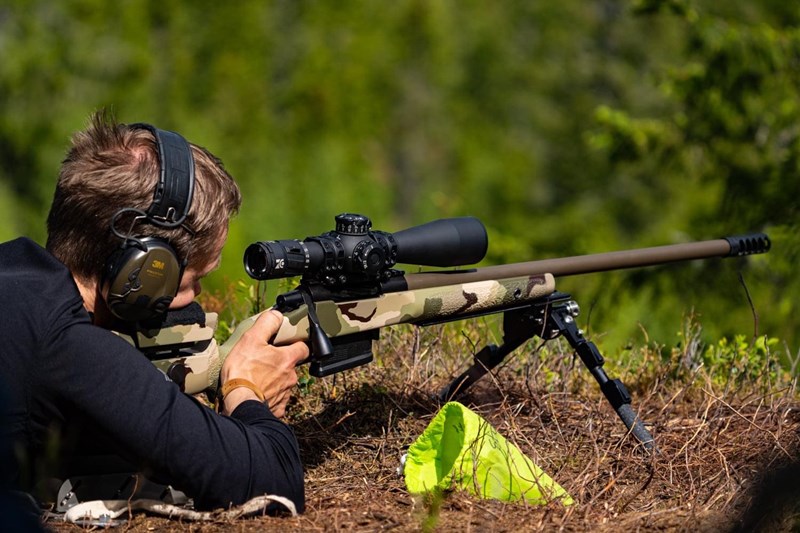 Now the season was here, and I was more excited than ever! Why? Qualifying for the World Cup in Precision Rifle was on the agenda and I had 4 qualifying competitions in front of me. I managed to win three out of four games – Haparanda Long Range, Östhammar Long Range and Tyfors Steel Open. Tyfors was also our first national championship in Long range shooting. It was here I decided to go all in and create my dream rifle, without compromises. Nothing would be left unseen or unconsidered. To secure good precision, as well as feeding and function, Dasher came to mind once again since it had all the features I was looking for.

Dasher was, and is, a well-known good bench shooting cartridge and has become a favorite for many long-range shooters. It’s a cartridge that can be fired at BR speed but has a longer base, which minimizes the risk for feeding problems with short cartridges, as short cartridges risks tipping in the magazine easier during recoil and position change. I still want to point out that this haven’t been a problem with either the 6 mm BR or 22BR, that I’ve also tried. Everything has potential to be better and for me, it’s important that I can trust my equipment to 100% since my mind quickly can put me out of balance.

This time around, the choice of bullet was even easier since NORMA had developed a 6mm Dasher case. I’m looking forward to reviewing this caliber in close collaboration with NORMA. I will do my best to bring you along on this journey, both caliber wise and of course on my way towards the World Cup. I also hope to help you with a straighter path into the sport. 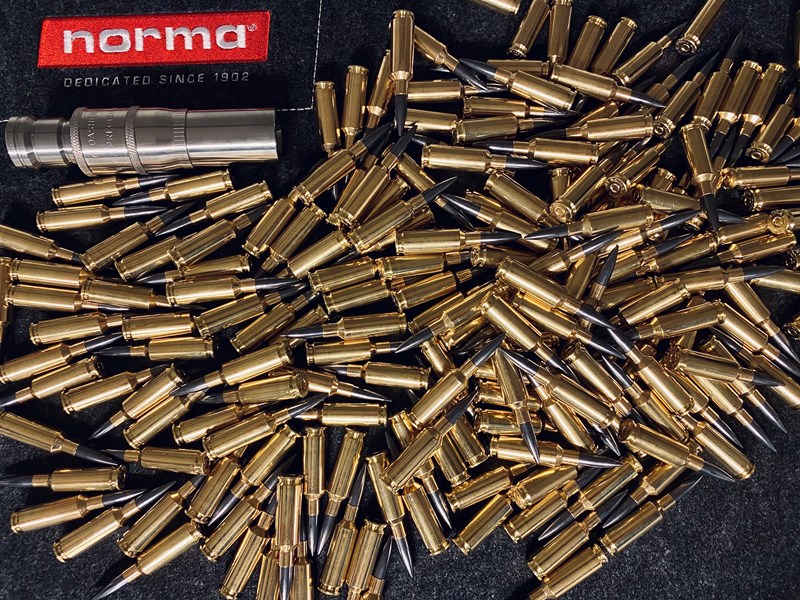 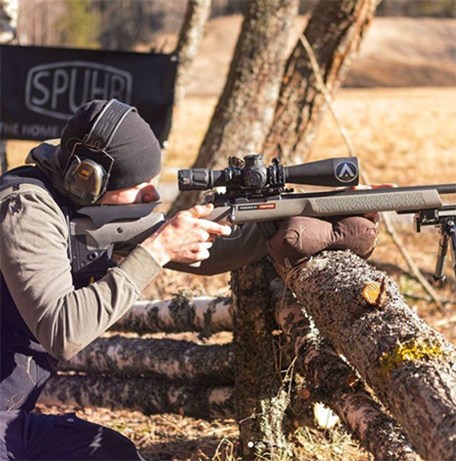 • Keep your calm even if you run in to problems - ”you can’t miss fast enough”.
• Analyze previous station, bring knowledge and focus on the next.
• Enter your bubble, plan each station, prepare and get inspiration from other shooters during the game – but prioritize your own solution and do what you’ve practiced.
• Bonus: Always have plenty of food and water.

Successful Elin Åhlin, aka Shooting Queen, aka Swedens by far best female rifle shooter, has a well established tactic before this years championships. We met Elin for an interview where she shared her story, her success and ends with three tips on how to become a better rifle shooter. Read the article here!