The air is fresh as the sun rises and slow- ly finds its way through the treetops. It’s mid-December, a little below zero, and the leaves on the ground crackle from frost. Me and my friend Klas have taken to the woods to see about some game. These woods are known for fallow deer and wild boars, but also for a fair amount of red deer. We have our minds set on one specific red deer male that has been spotted during the fall, always getting away. The imposing red deer has been an object of fascination and mystique to myself and many others, and therefore something of a dream trophy.

Well aware we have a difficult task ahead of us, our rifles are loaded with a new ammo from the Norma factory in Åmotfors. I’m one of only a few being trusted to try the new bullet in the STRIKE series, the blue-tip BONDSTRIKE. Following TIPSTRIKE and ECOSTRIKE, it’s the third installation in the series. The precision is flawless and the bullet works perfectly with my rifle.

The trails are fresh

All of a sudden we hear it, a creaking sound from a bit above us. Is it our red deer? The creaking continues, and we’re lucky enough to find a spot with moss to keep us silent. It becomes apparent that this must be more than just one animal. Klas picks up his binoculars and holds his breath. He has something in his view. Frozen like a statue, it’s a fallow hind, looking right at us. She’s dark and not easy to distinguish from the surrounding forest, but there she is. And then she’s gone again in a blink. Soon after, a parade of fallows passes before our eyes. It’s a magical moment in time. 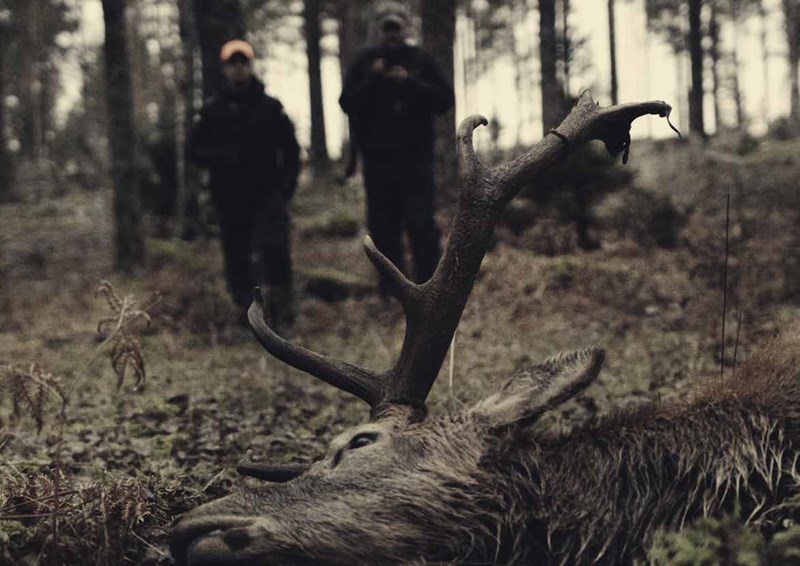 The suspicious fallow hind is long gone, but what we have found is the game’s path in these woods. We follow the fresh trails and find ourselves moving steadily upwards, with the hope of letting the fallows guide us to other game. Our premonition is that the red deer might well have passed along the same path a little bit earlier.

While it’s important to be silent, we still try to move fast. Halfway up the ridge I spot some- thing that makes my heart stop. Something brown is moving a bit further ahead. Another fallow deer? No, this is a different type of brown. Klas gets his binoculars up again and realizes this is a small group of red deer. As I sneak up my range finder, he’s suddenly there. The red deer male, the one I have dreamt about. Not necessarily with the biggest antler, but with a sturdy and majestic body.

We watch him disappear among the fir-trees. Klas knows these woods better than me and takes the lead as we hurry on up. Crouching and moving, we start a steep descent through the dense forest. It turns out to be the right move. One after the other, we see them appear far away. They behave as though they have sensed our presence, moving restlessly with eyes and ears on alert. The red deer male is not among them. Have we missed him? Did he take another route? My hunting pulse is high now. Estimating
the distance is hard out here, but I tap 200 meters on my ballistic turret to be prepared if the opportunity reveals itself. A minute passes. It feels like ten. Then, from the right side of my field of vision, I catch a glimpse in the corner of me eye. It’s a majestic revelation entering my telescopic sight. It’s the male red deer we have been looking for. The patches of light in the dark woods are tiny, and the chance will soon be gone. The very next moment, everything falls into place.

Magic in the making

One shot! I hear the muffled sound of a hit before I can tell if it’s from the deer. The distance is too small to tell. I load another bullet and look in my sight again, only to watch the red deer fall. It’s a magical feeling. As we approach the deer, we are curious about where the shot hit him to have such a powerful impact. As it turns out, he was hit behind the shoulder. We contemplate the scene for a while; it’s a beautiful moment.

We can’t find the exit hole, because there isn’t one. I can feel the bullet under the skin behind the other shoulder. The bullet has passed through the ribs on both sides, and even though it hasn’t had to go through the muscular shoulder, the bullet has released its full energy and expanded with force.

Memory of a lifetime

Later in the slaughterhouse I understand why the red deer fell as fast as he did. The damage to the vital organs is extensive. With a hit in the middle of the shoulder, we would probably have seen a bigger meat spoilage. Here, it’s minimal. Still the impact on the big animal has been powerful. The expanded bullet was weighed to 9,3 grams, a proportionate weight retention of 80%.

We return home with nothing but warm feelings. I have seared yet another unique hunting memory onto my retina, and BONDSTRIKE has made me feel confident all through the experience—in spite of the somewhat long striking distance of 200 meters. The suspense, the nature, and the euphoric ending made the red deer adventure a memory for life, a memory further silver lined by Norma’s BONDSTRIKE. 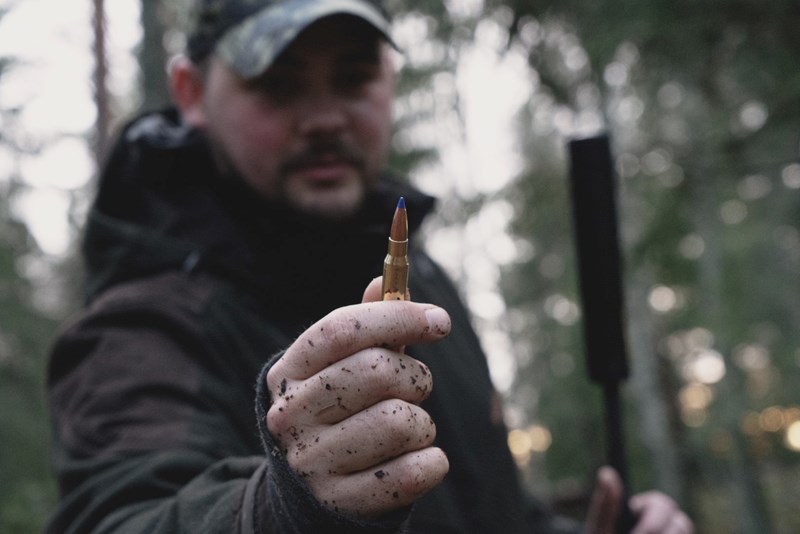