What Ballistic Gelatin is

Ballistic Gelatin, also known as ordnance gel or ballistic block, came about as a scientific testing method to study the performance of projectiles once they reached their target. This sub-field of ballistics is called terminal ballistics and is obviously very important in military, police, security and hunting. As a target shooter you generally tend to dismiss this portion of ballistics completely, target shooting is all about exterior ballistics and getting hits on the mark. As a hunter or defense & law enforcement agent you are almost as dependant on the terminal ballistic performance of your ammunition as the exterior ballistics. Getting a bullet on target is only half the battle so to speak, only the effect of the bullet on the target can validate a good shot. However, as hunters we know how difficult it can be to derrive bullet performance in each particular hunting situation, with changing environments and targets. So, in order to develop better projectiles, scientists and ballisticians developed ballistic gelatin to simulate targets and study bullet performance in a repeatable way. Ballistic gelatin has been engineered to its specifications precisely because it closely mimics the behaviour of muscle fibers in living creatures and can therefore tell us how a hunting bullet will perform on a real hunt. This in turn is crucial information for the ballistician, who is trying to create a projectile that will not only fly well, but also deliver a particular terminal effect. Because ballistic gelatin mimics muscle tissue and muscle tissue is common to all game, it is suitable for testing a wide range of ammunition. Further, in order to simulate a particular species such as the thick-skinned game found in Africa, the gelatin can be covered by other material such as metal or wooden plating. As allways, a test is just a test and there is not a 1-to-1 relationship between testing and real world performance, but the characteristics of a bullets terminal performance, such as penetration, fragmentation, expansion, energy delivery or weight retention will be quite accurately observable. 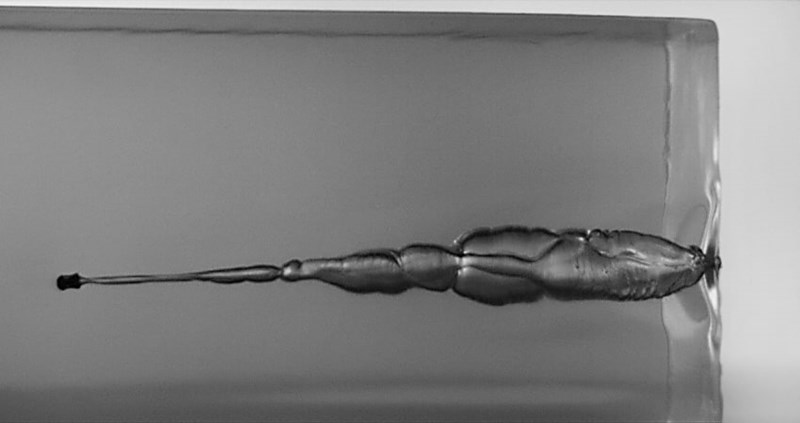 Pictured: An airgun pellet shot in ballistic gelatin. While airgun pellets have much lower velocities and energies than rimfire or centerfire projectiles, they can still be examined through the use of ballistic gel.

The essence of ballistic gel consists of so called 250A high bloom gelatin mixed with warm water that is then temperature treated. One mixes or dissolves the gelatin in warm water, then it is molded to the right shape and cooled down. The consistency of shape and texture, and therefore your ballistic studies, is dependant on carefully mixing at the same temperatures and cooling the gelatin correctly every time. Otherwise, your ballistic block will behave differently and give misleading results when shot at. There are different mixtures out there that will result in either a clear or a yellowish gelatin and some mixtures are even re-usable after shooting them as they can melt back into liquid form. A final thought to note is that ballistic gel and ballistic soap are not the same thing, allthough they do serve very similiar purposes as they are tools for researching terminal ballistics performance of projectiles. 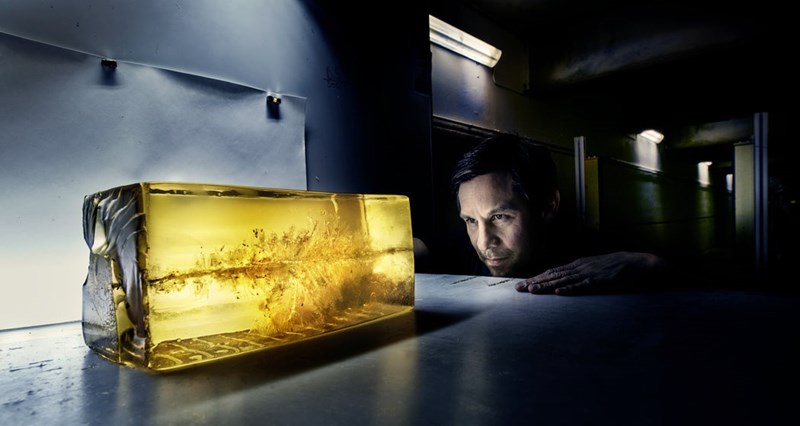 Inspection of a ballistic gel block after it has been shot at, from the side we can see the typical straight line penetration of high quality ammunition with no deviation, as well as full energy transfer inside the block.

How ballistic gelatin is used

Now that we know what a ballistic block is, we can move on to actually utilizing it for some terminal ballistics testing. The core of ammunition testing on ballistic gel is shooting at the block and studying the effects it had on the gel. If you were to just shoot at a block of ballistic gelatin without a plan, it would not tell you much usefull information. First, we have to look our ammunition and what it is supposed to accomplish for us. The most common types of bullets in hunting are expanding bullets and fragmenting bullets, in some cases like dangerous game hunting in Africa you also see solid construction bullets that are supposed to provide maximum straight line penetration. The bullet construction itself is not so important at this stage, a ballistic tip bullet for example can be either an expanding or a fragmenting bullet. At this stage, a ballistician is more interested in what the bullet is supposed to and how to measure that from the ballistic gelatin. He can then go back to the drawing board and re-design and optimize the construction features of the bullet with the things he learned from the tests. There are 2 major ways of measuring the ballistic gel, the most important is physical measurements of the effects on the gelatin block and secondly the optical/visual observations we can do. At Norma, we utilize high-speed cameras to film our test in slow motion to allow for carefull study of the tests and we also fill the cavity with color to see the internal effect.

Let's take the ECOSTRIKE as an example for this article, it is copper bullet with a ballistic tip and is designed to be an expanding bullet with heigh weight retention. Based on this, we could have to following expectations on our ballistic gelatin test: 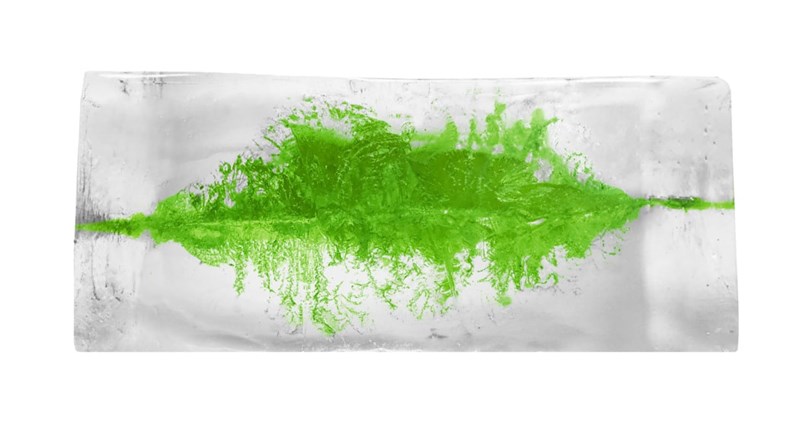 Pictured: ECOSTRIKE test shooting at ballistic gelatin, displaying all the characteristics you would want from that particular bullet construction

When looking at this colour-filled gel block above, some basic things you can note are that the bullet penetrates the block (from left to right) for a couple of centimeters before expanding. For this bullet design it is the desired behaviour, as an immediate expansion would mean that the bullet has allready delivered a lot of its kinetic energy before reaching the vital organs of a wild game. Secondly, we can see that the the colour-filled area expands quite drastically into a wide area, covering most of the block. This is also desirable in a projectile such as this, as it means that bullet actually does expand and when it does, it does so rapidly and violently in the vital areas. This large area of colour can be used as an approximation of hydrostatic shock, the effect that produces rapid, clean and ethical knock-down effect. Finally, we see that the coloured area tapers off and the bullet continues to travel, which tells us about the depth of penetration for this particular design. For a monolithic copper bullet like ECOSTRIKE, we would expect strong bullet penetration like this.

Here is another example of a ballistic test with BONDSTRIKE, a long-range projectile with bonding construction and a ballistic tip, designed to expand even at great distances. Now it is your time to test out your knowledge of ballistic gel, what can you say about this block? 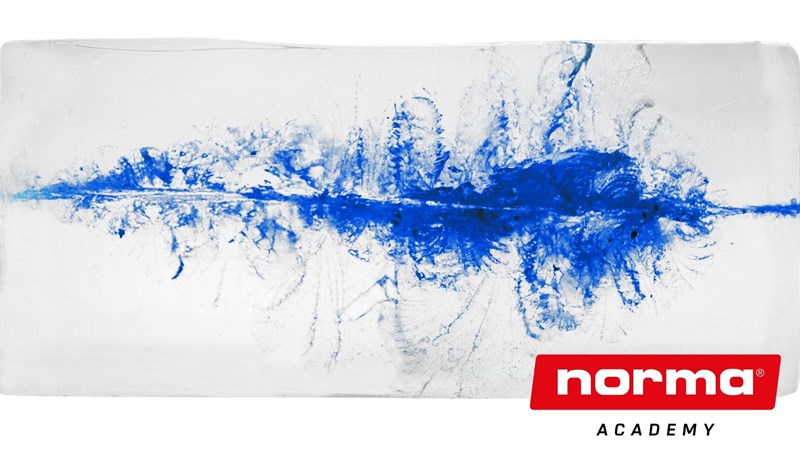 Pictured: Norma BONDSTRIKE shot in ballistic gelatin, what is your assessment of this projectile?

We like to use high-speed cameras to capture our ballistic gelatin tests. As ballistic gelatin only approximates muscle tissue, it can sometimes be misleading to judge something like wound cavity from just the block alone and that is an example of where high-speed imagery can come in handy. The camera can also capture details of bullet characteristics, as you can see in the comparison above. As you can see with EVOSTRIKE and TIPSTRIKE, our most hydrostatically efficient bullets with the most knockdown power, the also penetrate in a straight line. It is generally undesirable for any projectile to change course, the technical term is bullet yaw. You can see in the bottom example of EVOSTRIKE however, that small fragments sepparate in the early stages of bullet entry into the ballistic gel. This is the process of fragmentation, and is responsible for the massive bulging of the block which simulates knock-down effect.

Let's summarize the basics of ballistic gelatin, what, how and why it is used for evaluating ammunition.