The moose as a target

Moose are big animals and for many it is a dream come true to go on a moose hunt. Despite the very challenging hunts that typically take place in quite remote and wild areas that moose tend to inhabit, the moose is a very forgiving target for the hunter to shoot at. In this article we will demonstrate and highlight the most important things to consider when aiming at a moose so your shot will be clean, ethical and optimally accurate. As moose can be found in many places in the northern hemisphere and are quite similiar to other deer (Moose technically belong to the sub-family of Cervidae, i.e Deer) , your conscientious skills in shot placement on moose will translate well to other wild game and hunting in other areas of the world.

As you can see in the video, moose offer up a lot of area for you potentially shoot at. Where would you have placed your shot? Read the article below and maybe you will change your answer or learn something new about why you placed it where you did. 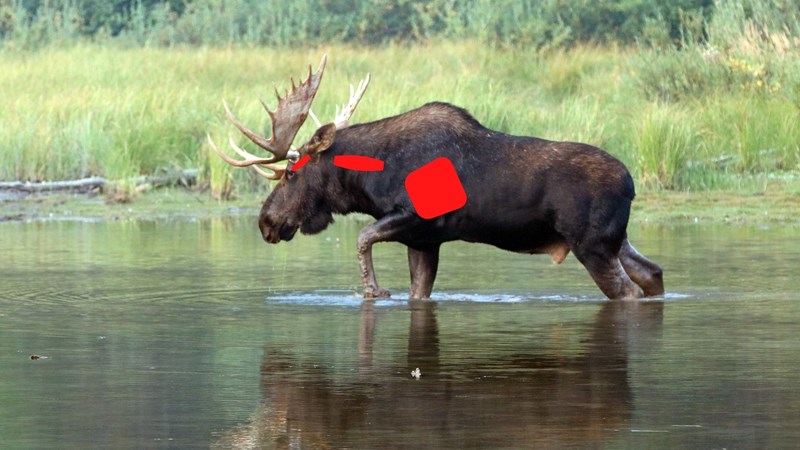 You are probably going to want to wait for this bull to come out of the water before pulling the trigger, or it will be a long and wet day of field dressing.

The vital areas on moose, which will result in a kill when struck are:

The reason why the moose is quite a forgiving target is because of the massive size of these beautiful animals. But even so, on large 1000kg bull moose, the brain is not much bigger than a standard baseball or tennis ball and protected by bone structures and the antlers. The spinal cord and major arteries in the spine and neck are large compared to other animals, but still they are only roughly similiar to a soda can in diameter. The lungs and heart however are massive, the lungs on a grown moose are going to be size of oven tray and they are not that heavily protected by bone. The heart of the moose is also very large as it has to pump blood throughout that massive body, it sits a little more protected down and to the front of the leg. If you trace the front legs of the moose up roughly 1/3 to where it meets the shoulder, thats where the heart is.

Where to aim on the moose

The most ethical point of aim on a moose is obviously the lungs, as any beginning hunter should have the necessary marksmanship to place a shot that strikes both lungs for a guaranteed kill that is quick and clean. Often times, the impact to both lungs is enough to drop the moose instanly, but even if doesn't you don't have to worry about it running too far from the spot. The hydrostatic shock from the bullet, along with rapid change in blood pressure is usually enough to knock out the animal. An even more efficient point of aim is to strike both lungs and the heart, which means your aim should be a little lower and a little further towards the leg. Both of these shot placements require you to get off a broadside shot at the moose so the penetrating bullet has a path through all these vital organs. If you aim too closely toward the shoulder and leg, you risk getting a bone impact which will cause a very violent expansion, so track the leg up a bit to where it meets the shoulder and aim a smidge behind it.

The most angular offset you should allow for is a quarter turn, otherwise you risk striking only the first intended organ and the bullet penetrates away from the other. This can cause slower kills, which in some terrain could lead to the loss of an animal and also more damage to meat than necessary. It is for this same reason that shots to the heart from the front are not advisable, the bullet penetration path is pointing straight through the animal in this case which is problematic if it reaches the stomach. As the heart sits quite a bit lower than most of the lungs it's also tricky to hit the lungs from the front. 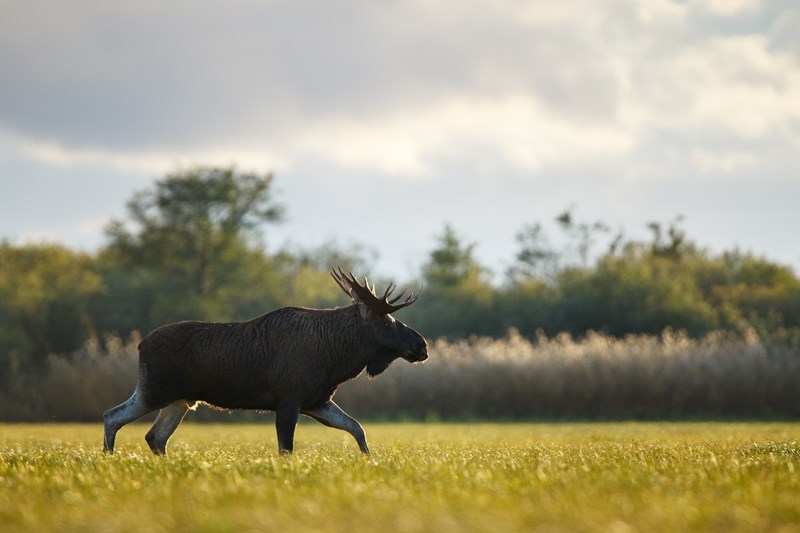 A perfect opportunity on a beautifull bull moose for a clean broadside shot for maximum efficiency and safety.

It is quite unnecessary to attempt headshots on moose. Moose are big game, but not tough game. Boars or badgers are much tougher pound-for-pound where even perfect heart and lung shots can leave them running for quite long distances. Moose that are shot through either just both lungs or also the heart tend to drop immediately, so there really is no reason to attempt the much, much more difficult headshot. One of the common wounding shots in this case is to impact the jaw of the moose. Moose can survive for several weeks this way before they starve or succumb to sepsis, which is not acceptable.

While we are on the topic of tough game it is appropriate to quickly mention calibers. A moose shot through the heart with a lighter 6,5mm caliber will die quicker and cleaner than a poor shot placement with a 9,3mm caliber. People often equate the size of an animal with how tough it is, but most moose in Sweden for example are shot with a 6,5 x 55 Swedish Mauser and a bullet weight somewhere around 143 grains. We have an article on what apropriate calibers for moose that you can find if you click here. For purposes of this article, I will just mention that the caliber range of 6,5 mm to 9,3 mm is probably going to the be the most apropriate and suitable choice of rifle and ammunition.

We allready talked about the broadside and how important it is for the bullet's path through the vital organs. As a hunter, you can not control the angle at which the moose approaches, stands or flees however. A quick tip here is that like most deer, moose respond well to whistling. Should the moose be leaving at a bad angle, it is worth a try to let out a few whistles as the moose while often stop and turn toward the sound, giving you a quick chance for a safe shot.

A good mental model of safe shots is the classic clock. If the moose is standing straight and looking at 12 o' clock or 6, that is a frontal or rear shot, the rear shot especially is not allowed. If the moose is looking at 3 or 9 o' clock then those are the classic broadside shots. The moose can turn a quarter up or down from that position and still offer you a bullet path that will impact both lungs and/or heart. Any higher angular turn will be unsafe.

It can be tricky to judge body position and anatomy on wild game, especially on moving targets or on elevated or downward sloping surfaces. Often times a hunter will have downed a moose and as he examines the body, he is suprised to learn that the bullet has taken a different path or exit than he anticipated. This is because the weight distribution of the animal can be difficult to judge with an animal of this size. This is why broadside shots are prefferable, you wont encounter any surprises. 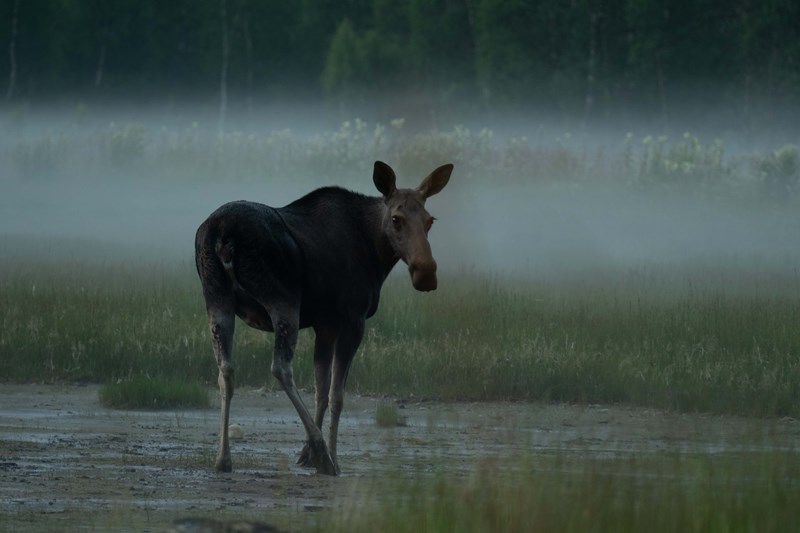 This moose has spotted its human observer and is starting to set off at a tricky angle, in situations like this you have to judge both the stance of the legs as well as the angle of the body.

Beyond just aiming at the right spot and executing a precise shot, you as the hunter need to be aware of a few peculiarities when hunting moose.

Moose are almost completely blind but have great sense of smell and hearing. Depending on predator population and general activity in the area, moose are quite quick to take off and take off fast. This is such a common situation during moose hunting in Sweden that the requirements for hunting them include a shooting test at running moose. Fortunately for the hunter, moose tend to run at the same average speeds so the ability to judge lead distance is something that becomes quite intuitive. A good rule of thumb is to move your point of aim forward roughly in line with where the ears are. This assumes an average hunting distance of around 70-120 meters. We have a video about this particular lead distance while aiming at moose here (starts at roughly 3 minutes in to the clip):

Moose do not form herds and are quite anti-social creatures. This means that it is often quite a straight forward process to determine the age and gender of an individual moose. But if you spot a moose and suspect that it is a female, you should allways, allways wait a while longer and see if any straggling calfs are coming along. This situational awareness during your moose hunt is something that comes with experience and learning. 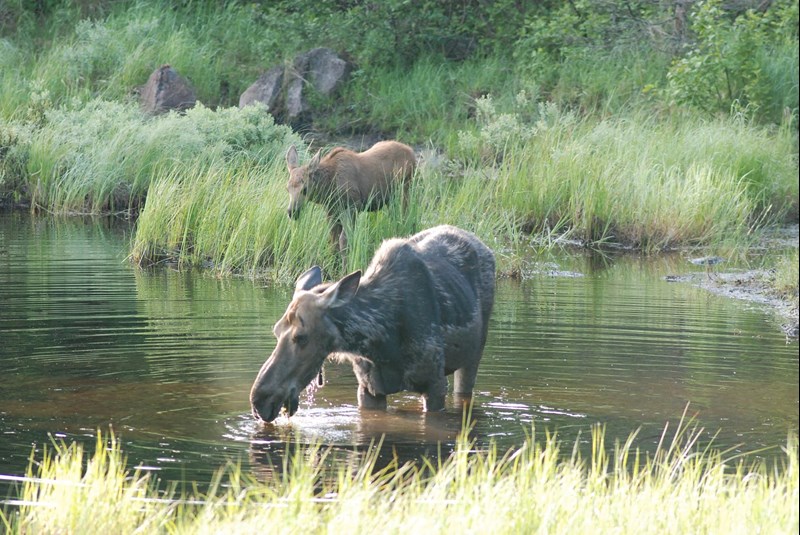 In this situation, it can be easy to mistake this for a solo female instead of a moose cow with calf. The grass almost completely covers the young one, and in a hunting situation you might never know that you are aiming a cow untill its too late.

Many first-time moose hunters can be overwhelmed when they come in contact with the animal, something that Swedes call "Älgfrossa" or "Moose-fever" sets in, with sharply elevated heart rate and jitters beyond control. Moose are seriously big animals, and if you encounter them at close range on the ground it can be intimidating for anyone. It can happen to anyone, and there is no shame in it, as long as you do the right thing and calm yourself down before resuming any kind of hunting action.

Summary on shot placement on moose

To wrap things up, a quick summary to remember when determining your shot placement on moose:

A question that constantly arises as the hunting season approaches is which bullet is preferable. To answer that question, you should first ask yourself a few questions. At what distance do you expect to drop your game? Is the minimum possible flight distance or minimal meat destruction a priority?