As mentioned, the prone position offers the most accuracy after the benchrest. Benchrest shooting is mostly conducted when zeroing your rifle or for benchrest competitions where the limits of inherent accuracy are pushed to the max, but in a real world scenario there will be very few opportunities to achieve that same level of support and stability. Without furniture or gear, the ground is the only consistent reliable source of support and stability and hence the prone position is so usefull. As hunters we have to allways assume the shot position that offers the most accurate shot at the target out of the ones that are available to us. The prone position is also inherently stealthy, as you offer a minimal silhouette when lying down on the ground which makes it extra usefull in a hunting scenario. During practice, there will be quite low fatigue as well as the most work is what is being done by your shoulders propping up your upper body, which allows for longer practice sessions of higher quality. When we shoot standing up, our shoulders fatigue rather quickly while trying to aim the rifle, which means that the end of the practice session is usually of lesser quality than the beginning.

Shooting prone is often associated with more military shooting than hunting, but it is a great way for beginning hunters and sport shooters to get acquainted with guns and shooting. There is no stress while shooting prone and in fact it is one of the few ways to mess up a prone shot to rush the shot. Prone shooting remains relevant throughout the entirity of the hunters/shooters skill curve and learning. The expert hunter is served very well by this position as it will often be the only way to fire off a long range shot at wild game, and it is a common competition shooting style for sport shooters. 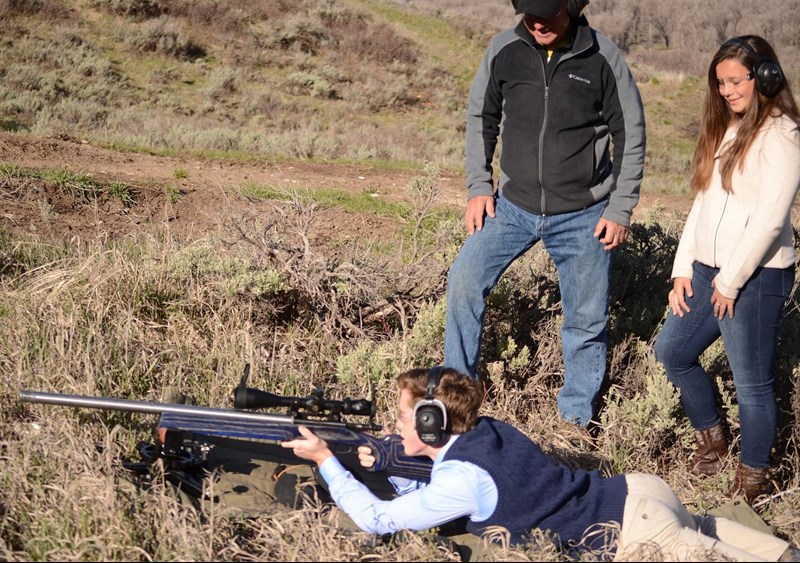 Pictured: Prone shooting is great to teach marksmanship to younger hunters as its fun, safe and requires very little strength.

Setting up in prone position

From bottom to top, these are the elements of the prone position:

If your stomach cannot comfortably rest against the ground, your diaphragm has to work a lot harder to help your breathing. This creates unwanted movement which lowers your accuracy and fatigures you over time, creating additional trouble for your precision. In this case, switch to a bent-leg prone position by bending your dominant side leg and resting more of your weight on the inside of that leg. 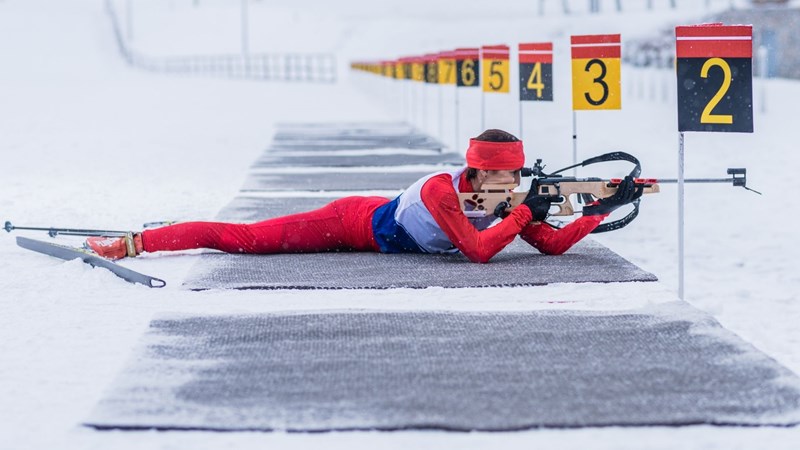 Pictured: Biathlon features both standing and prone shooting events to test the athletes shooting skills. Biathletes shoot in a much more canted body position relative to the rifle than other types of shooters.

The prone position basically isolates your accuracy to only be influenced by your inherent rifle, ammunition and scope accuracy and the small movements that arise from your heartbeat and breathing. These are quite small, but when looking through a high powered scope at long distance targets will be very noticeable. You neither want to turn off your heartbeat nor your breathing, so by developing a slow, deliberate and controlled breathing pattern you will not only lower your heartbeat but also be able to fire off precise shots in between your breathing cycle. Most people choose to do a pattern where they aim on the in-breath and then fire at the bottom of the exhale. The bottom of the exhale is the more stable than the top of your inhale, as your body fills with oxygen and expands your belly.

The second big aspect is trigger control. This one is a bit more tricky and up to personal preference and there are a plethora of different custom triggers and trigger setups with the various riflemakers out there. What tends to be universally true however, is that you dont want to squeeze off a shot rapidly with a forcefull pull of the trigger. Rather, you want to bring your finger to the trigger and increase the pressure steadily untill enough force is built up and the trigger fires off the shot. To really emphasize this and practice this trigger control, it can be beneficial to keep the trigger pressed down for a couple of extra seconds after the round has been fired. This teaches you to push through the trigger in a continuous motion as explained, rather than an abrupt squeeze. The problem with quick squeezes of the trigger is that they tend to involve more muscle movement and this can affect your accuracy as the hand is in contact with the rifle. 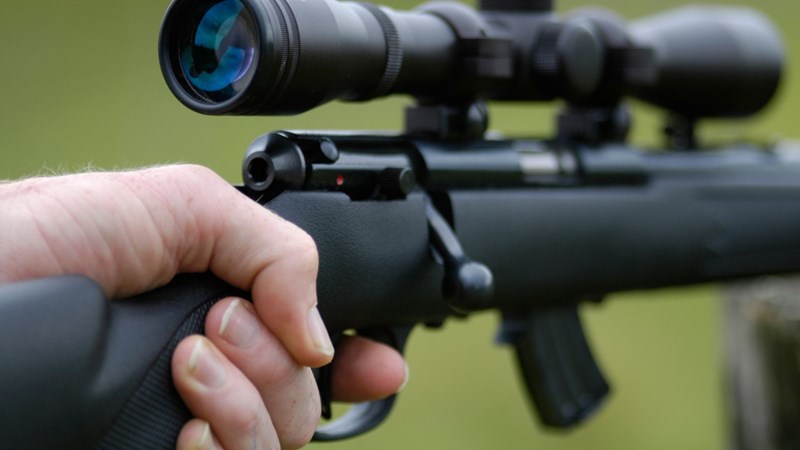 Pictured: Trigger control is best practiced at the range, while you can get a feel for your particular trigger without firing off a round, the combination between aim and controlled firing is really what you are looking to practice.

So now it is time to summarize what we have learned about prone position shooting. It is a vital, perhaps the most important shooting to position to master. For a beginner it is a great way to familiarize yourself with weapons and shooting in general, while for experienced shooters it may be required during a competition or hunting situations. There are some key principles to observe to achieve a proper prone position for accurate shooting, such as maximizing your contact with the ground, being well aligned and finally, breathing properly and exercising good trigger control.