The journey towards an epic hunting adventure is underway. Norma team members Staffan Johansson and Stefan Vänersand’s trip by car begins in the forests of Värmland, Sweden, crosses the Norwegian border, and will take us 600 km to the north, where we will reach the hunting grounds in South Trøndelag.

When we reach the final destination, we are met by a small cabin, with moss on the roof and only a dim light that shines by the door. The cabin is without electricity, but has a solar panel on the roof that makes a few lights light up inside. Our guide, Terje Tovmo, joins shortly after and gives us a warm welcome, in the form of lighting the fire and going through what we will expect in the coming days. 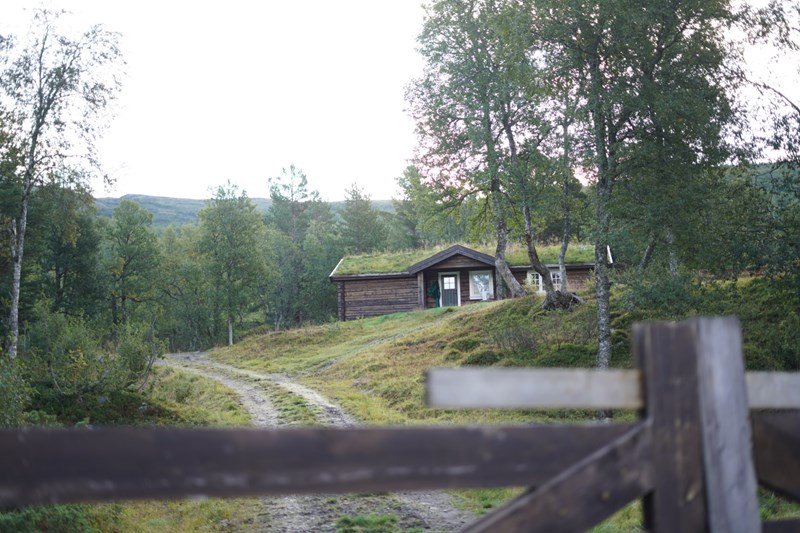 After a much-needed night's sleep, it was time to pack our backpacks and tie up our boots. It is always difficult to prepare for a hunt that you have never been on before. What terrain awaits, what temperature will it be, and how much will we have to walk during the day? The solution was to simply dress in layers and have the backpack far too packed.

It is more arduous to hunt wild reindeer than most people would imagine. Even slight differences in the altitude of the terrain can conceal entire herds. Getting within shooting range and avoiding giving away your position requires challenges out of the ordinary, for any hunter. And if you do manage to drop a wild reindeer, the task of getting the heavy body down the mountain still remains. It can take hours, but the final reward enhances the overall experience of a completely unique hunt.

Put to the test
The wild reindeer hunt is carried out using spot and stalk maneuvering. It is all about finding places that offer good visibility so that you can locate reindeer in the surrounding hunting grounds. If you manage to spot some animals, you must then evaluate whether they are the correct kind of game, and if it is even possible to get close enough to shoot, considering both the wind and the terrain. However, between the glassing spots there is a lot of territory to cover, and there are usually constant slopes to climb. This puts our hunters to the test. 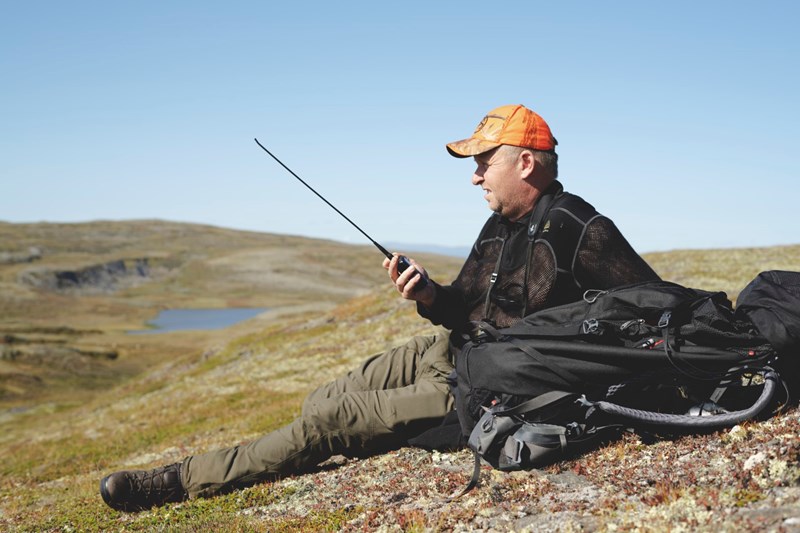 Our experienced guide explains that the wild reindeer move with the wind. By that he means that in southerly winds they move south, and in northerly winds to the north. They do this in order to continually maintain control over their situation and what lies in front of them. Staffan and Stefan are hunting in the northern part of this huge hunting area, and in recent days the winds have been southerly. This has contributed to a warmer air temperature, and therefore there is a lack of wild reindeer roaming this part of the countryside. Glassing, and more glassing. A small number of reindeer can be seen in the distance, but unfortunately there is no buck large enough to pursue.

Sheep encounter
The hunting grounds are used during summer and autumn as grazing grounds for sheep and other livestock. Therefore, it is not uncommon to encounter domesticated sheep here and there. They remind you of their presence as soon as you hear a bell ringing nearby. After covering more than 30 kilometers on foot, the day is rounded off in front of a warming fire back at the cabin. We take the chance to recharge our batteries in preparation for the following day of the hunt.

Company of others
A new day has arrived and the winds have changed, so our chances of success have greatly improved. There is not a cloud in the sky and the final heat of summer is glaring over the open fields. This makes an already labored struggle even tougher. As the day goes on, we see several other people on the mountain. We turn to Terje who explains:

– Hunting wild reindeer in Norway is a bit like hunting on public land in the US, with the difference that, instead of buying tags, it is the landowners each year who receive a number of assigned tags on calves, females, small and big bucks. Because of this, during the finest hunting days you are rarely alone up in the mountain fields. You are always in the company of other hunters.

In other words, when you look through binoculars you can see several hunters around the mountains. And to our surprise, we even got to experience other hunters sneaking towards a herd of reindeer a kilometer away. When you hunt in a national park, no motor vehicles are allowed. And if you are lucky enough to drop any game, you’ll have to skin the animal on the spot, cut it into pieces and carry it in your backpack to bring the delicious meat back home. Horses, on the other hand, are legal and are occasionally used by hunters.

Reindeer ahead
After an hour long glassing session we have now spotted a larger herd of reindeer moving in our direction. Looking for a way to a better position, our guide Terje suggests moving to the other side of the ridgeline, to get closer if the reindeer continue to keep heading up that way. 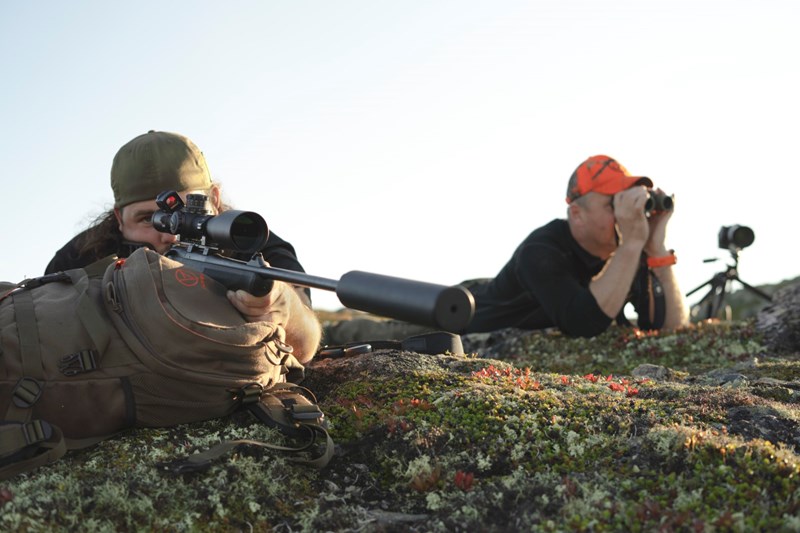 We do not even reach the place we planned, when we realize that the herd of reindeer have changed direction, and they are heading in our direction, at full speed. In this situation, choosing the right animal, finding a safe shot and also communicate with each other which one to take is, to say the least, a challenge. The chance of shooting one of the big bucks is gone as fast as it came. But a younger buck gives the opportunity for a shot. However, Terje advises against shooting this time – we should try bagging a bigger one.

Another buck, slightly larger, comes walking behind the large group. He stops and starts grazing a few hundred meters away. But again we are reminded that we are not alone on the hunting grounds. A hunter suddenly appears over the ridgeline, who probably followed the group of reindeer that recently passed. The hunter seems to focus on the lone buck, leaving us as spectators, so as not to jeopardize safe hunting procedures.

Heart rate booster
An advantage of being several hunters on the hunting grounds is that our guide Terje occasionally receives reports of observations. And he has just received a report that makes his heart beat a little faster. There is a new herd of reindeer on the way, but we are on the wrong side of the mountain. So, to avoid losing this chance, there is no time to waste – we are running!

As we reach the next ridgeline, the new herd of wild reindeer appears. We throw ourselves on the ground, take support on the backpack and try to find the biggest buck in the group. The reindeer, like many other species of wild game, employ a defense mechanism by clumping together when they sense danger. This makes a clean kill extremely difficult, because one risks injuring an animal other than the one you intend to shoot at.

We have located the largest buck in the group, one with a white neck. The buck is easy to distinguish within the group, but still difficult to get a safe shot at. The herd of reindeer increases the pace, and they run close together, away from us. The selected buck takes the lead, and divides from the group for a few seconds. However, an opportunity emerges and a shot echoes over the hunting grounds. A well-placed shot, just behind the shoulder. 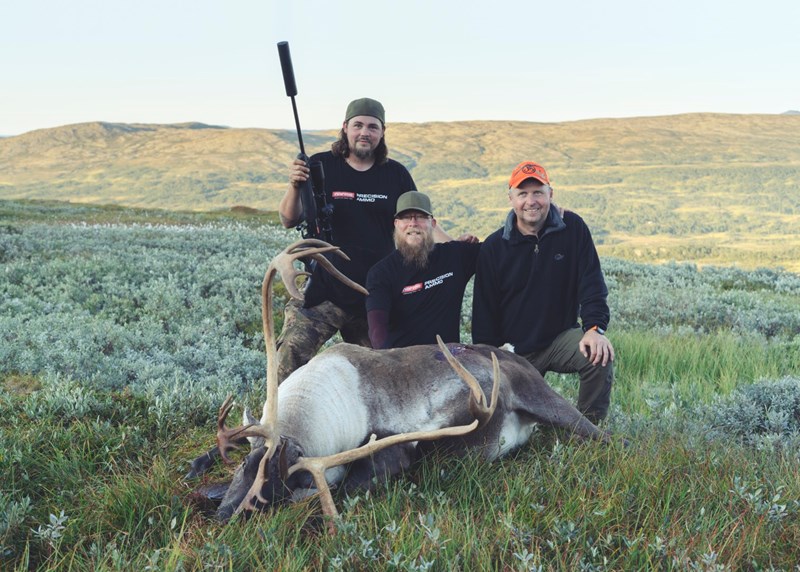 Epic hunting adventure
A buck worthy of a gold medal is down, dropped in his tracks at 220 meters with Norma BONDSTRIKE in 7 mm Rem Mag. The shot has taken just behind the shoulder and later on we found the strongly expanding bullet in the skin in front of the shoulder on the other side. We have many hours ahead of them before the reindeer buck is cut up and carried down the mountain. The silhouette of another group of reindeer appears over the ridgeline in front of the entrancing sunset, and really gives us a spectacular end to an epic hunting adventure. 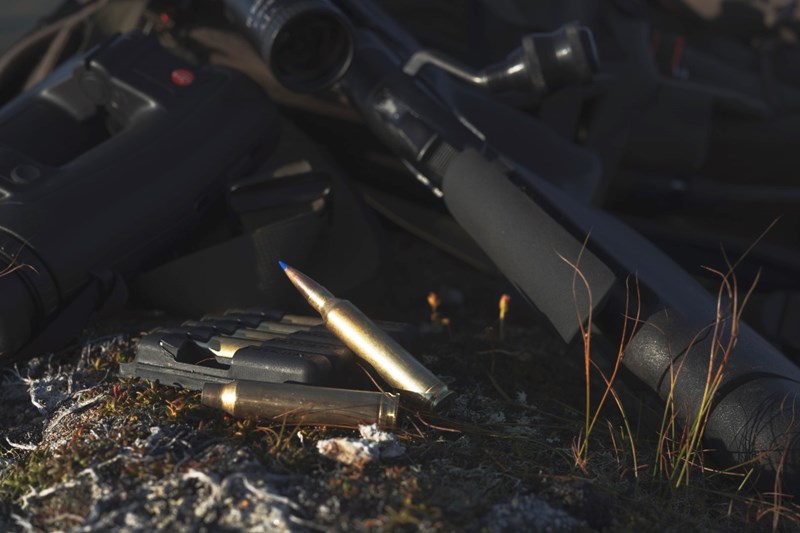 Follow Norma on social media to not miss out on the next EPIC HUNT.