Hunting is one of the oldest professions known to man and has seen continuous developments in traditions and technologies used. There is but little left to remind one of the ancient times of spears and bow-and-arrow and modern electronics are gaining more and more importance in the tool kit of the modern hunter. We are at a new dawn for hunting and with the rise of thermal and night vision optics the borders of night and day are slowly erased. This development should be considered in line with the development of the first firearms of the 15th century as one of the more important technological shifts. At first glance, one might stop at this development and have trepidations about our honorary code as hunters and the sportsmanlike conduct of the hunt, but there are also some clear cut advantages to this technological revolution. The question, as allways, is how one employs these new tools while hunting game in an ethical manner - Where there is light, there is also shadow.

Take the current problematic situation of exploding wild boar populations in Germany as an example. Rising number of boars due to a steady year-round supply of nutrition and mild winters have been created favourable conditions for population growth. The yearly culling of boars in Germany has doubled by a factor of 2-4 in the last 20 years, from 251,431 boars in 98/99 to 599,855 in 19/20. Given this trend, the question at hand for hunters is one of how to quickly and efficiently manage populations with looming problems at the door such as an outbreak of African Swine Fever. And here is where tradition meets technology as the use of optic attachments that add thermal and night-time capabilities to our gear could add that needed efficiency. For those who are looking into making that choice, this article contains a an overview and summary of the advantages and disadvantages to using thermal and night-vision imaging devices.

As with all things hunting-related, we need to look at our specific goals and needs and form a decision based on the complete picture of those things to be able to pick the right gear. 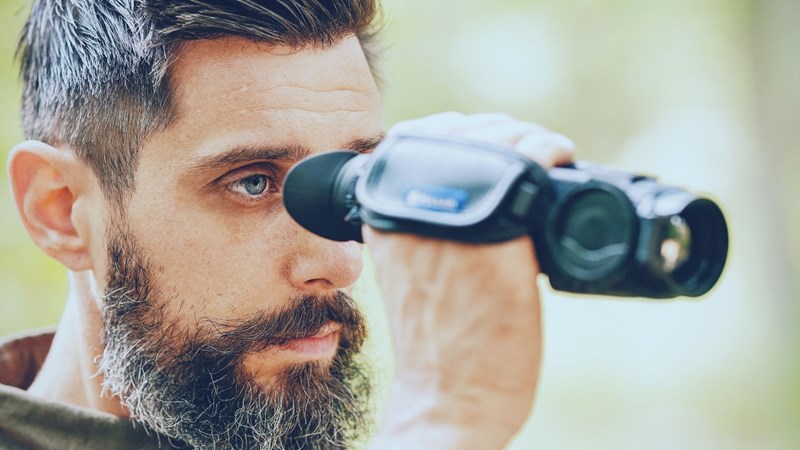 Humans perceive the world and their surroundings through the spectrum of visible light. There are rays with wave lengths outside of that spectrum however, that are not visible to the human eye. This is where thermal imaging devices come in and translate infrared light into something that the human eye can perceive. These infrared waves originate through the presence of heat, which is a form of energy and something we typically see emitted from the body of an animal or a ventilation duct on a building. This thermal energy sends out infrared waves which are picked up by the thermal imaging device and then translated and mapped out as an image on an electronic screen that we as humans subsequently can see and interpret. This image shows the shape and contours of the observed object and the greater the thermal difference between the object and its surroundings, the more clearly the object will appear on your thermal imaging device. To produce a thermal image, no visible light is required and that is really what defines the use case for a thermal imaging device and what makes it stand out. As infrared light does not pass through glass but is absorbed, it is impossible to detect object through or behind glass. It is however possible to still detect some shapes on a mirror, as infrared light is reflected by the surface of a mirror. 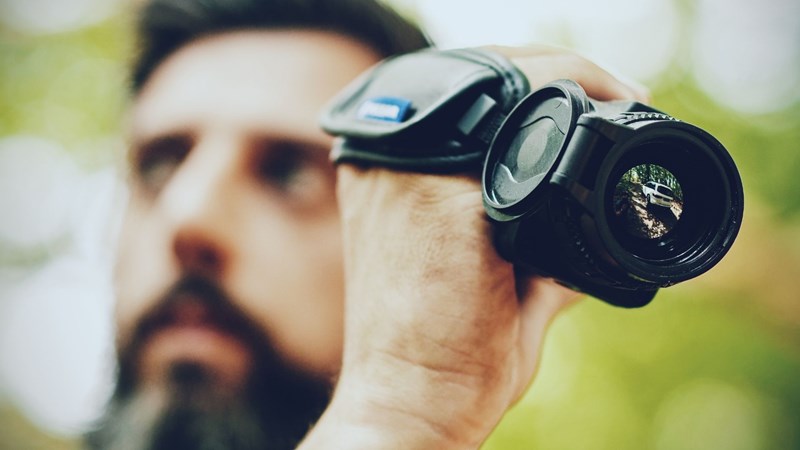 • Spotting wild game is very easy and fast with a thermal imaging device, as heat signatures show in stark contrast to their surroundings. This is also true in dense and cluttered areas.
• Thermal imaging is deployable during both day and night as it doesnt rely on the visible spectrum of light.
• Thermal technology is usable almost completely independent of the weather, only very strong fog will interfere.
• Use of thermal imaging can improve hunting efficiency, reducing the human footprint out in the woods and hunting grounds.
• No need to use an external light source (infrared amplifyer) makes the hunter even less visible when out in the fields.
• Low weights and good ranges (depending on the price range) makes thermal imaging devices very flexible and powerfull gear.
• No scope glare or reflections to alert wild game to your presence.
• The infrared sensor is very resistant to degradation.
• Thermal imaging devices allow you to very accurately identify game, for example in a pack of wild boars you can easily identify if a sow is herding yearlings or feeding young piglets or as traces from the suckling will be clearly visible.
• Shot safety even in complete darkness. 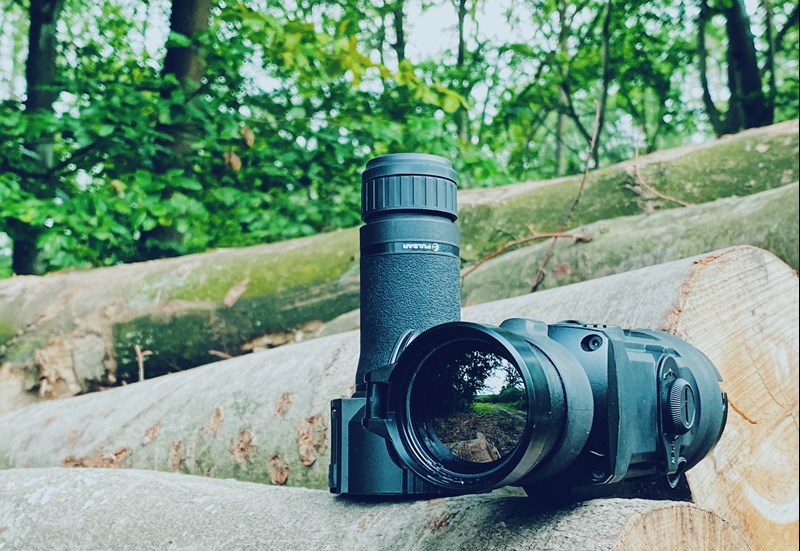 • The use of thermal imagery entails a lot of energy consumtion, usually a battery will last 3 to 5 hours.
• Thermal optics usually come in quite high base magnifications which make them hard to use on running game, which is further exacerbated by the fact that it can be quite hard to judge distances.
• Thermal optics can not be used to gauge antlers as they do not emit heat signatures.
• Thermal scopes and mounts need to be zeroed in before use.
• Glass, such as a car window, absorbs infrared light and therefore you can not use thermal devices without rolling down your window.
• High humidity in combination with high temperatures can severely distort the heat signals and thus your thermal imaging will be unsharp.
• While spotting and observing you need to keep in mind that smaller obstacles such as grass, bushes and branches are not visible in a thermal device, so it is possible to miss them or forget about them before you take a shot which will lead to deflections, misses and possible wounding. 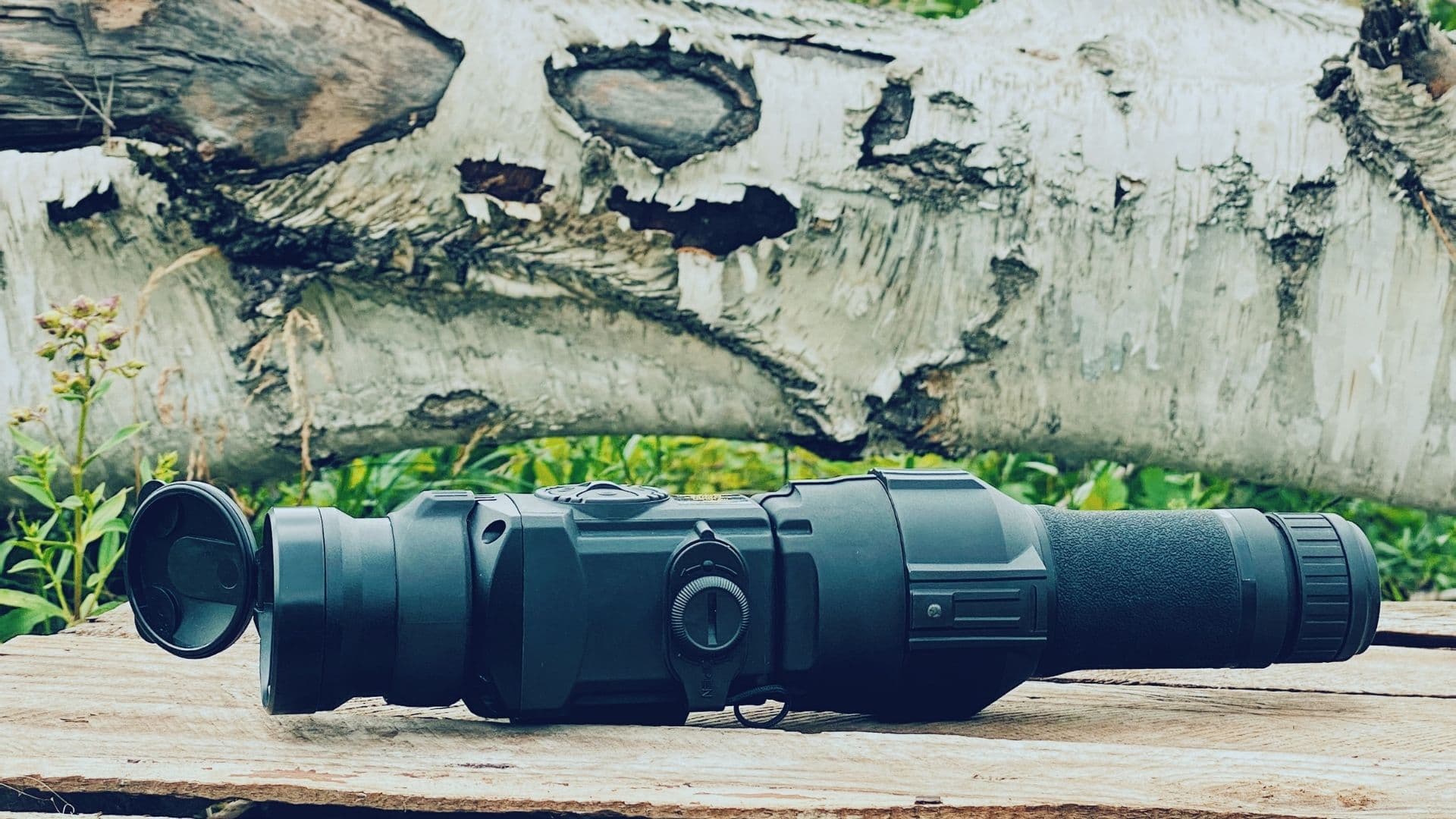 The core functionality of a night-vision optic device relies on the principle of residual light amplifcation. This method is based on taking allready present lightwaves in the dark, such as moon light, star light or the glowing backdrop from the city and amplifying them enough so they become visible and interpreteable to the human eye. The further use of infrared magnifiers can bring even more light into the dark and provide guaranteed vision in even the darkest conditions. A night-vision optic device consists of the electronic components, an objective, an eyepiece and photocathode. Light consists of photons that enter your device by light waves, where they are turned into electrons. The device then takes these and chemically and physically amplifies their numbers and magnitude and these amplified electrons collide with a phosphorous sheet to produce the image that you can see through the eyepiece. The image will appear either in green or black and white, but it relies on the presence of some residual light at some level which means there is a lower bound of darkness at which there is not enough original photons to produce a visible image. 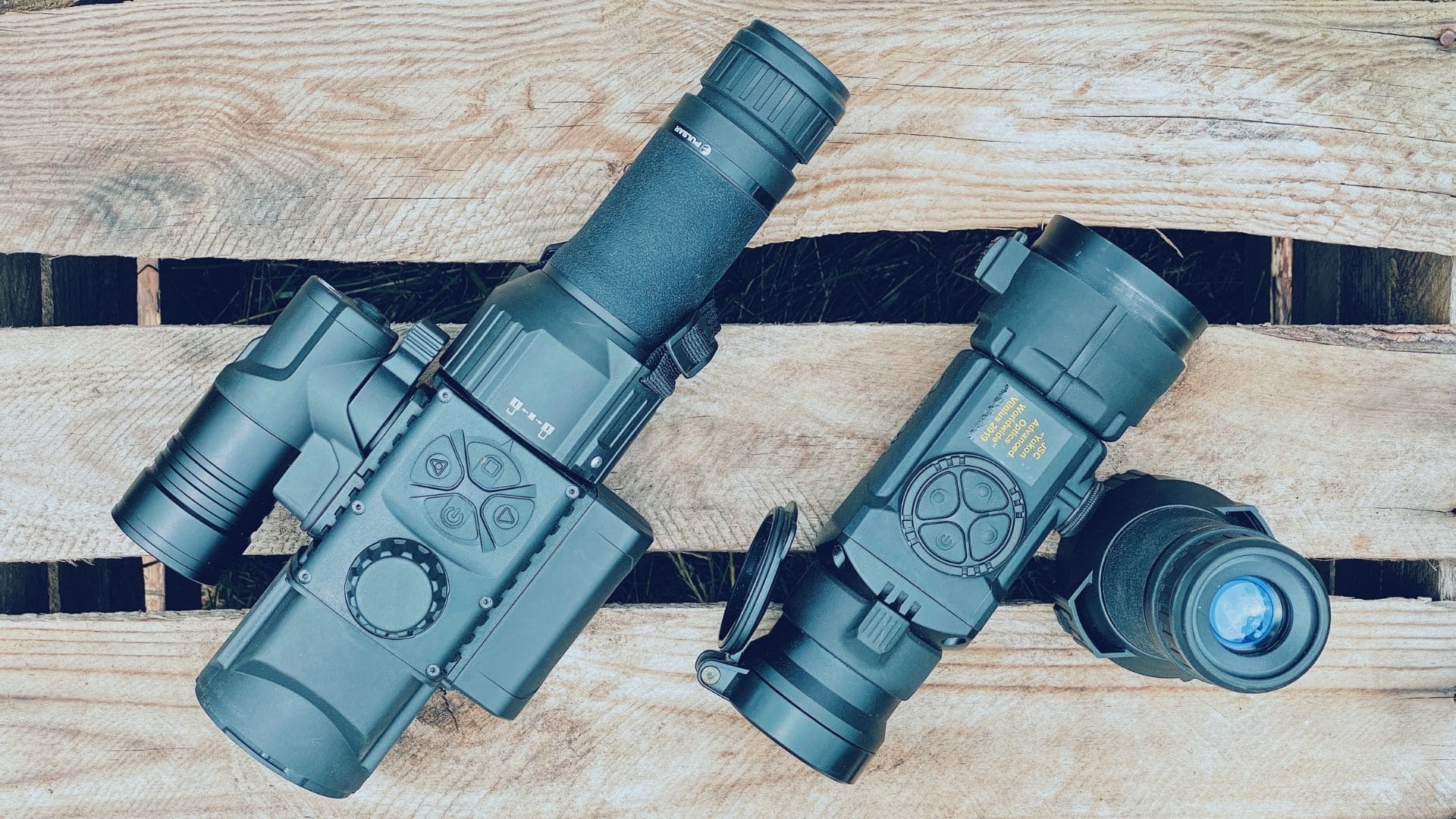 • Energy consumtion of night-vision devices is to be considered on the lower end, with batteries lasting roughly 50 hours.
• Imaging is detailed and in real time which makes it possible to see the animal in high definition and also to gauge the size and shape of antlers.
• The additional zeroing in of a night-vision scope or mount is not necessary as the light travels straight through your scope. It is allways recommended however, that you fire a control shot to check for any deviation.

• The spotting of game is more diffuclt, as contrasts in a night-vision device are lower than both traditional and thermal devices.
• The photomultiplier tube is prone to wear and tear which means the average night-vision device will last you around 1.000 hours.
• This technology is highly dependant on the weather and athmospheric circumstances.
• Use of night-vision is limited to the dark hours of the day, but you still need some residual light for it to work. Without residual light, night-vision will not work.
• Obstacles that interfere with the device, or if something pops up really close, are oversatured by the amplifcation and infrared magnifier and thus will dazzle the hunter. This can prevent you from firing in certain situations. 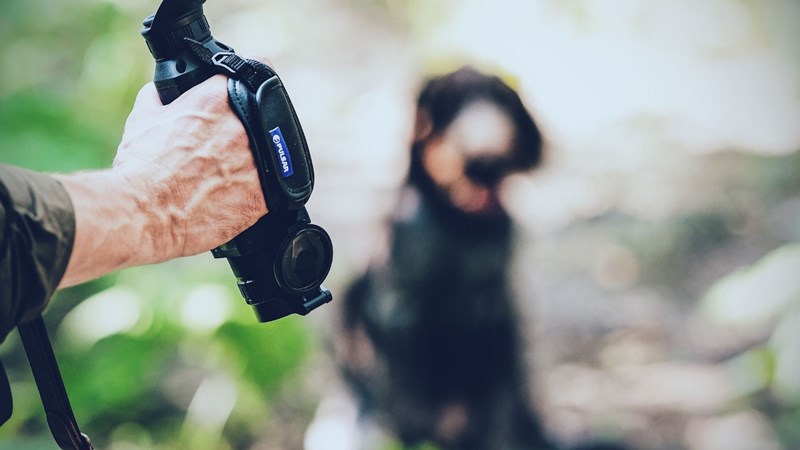 Summary on thermals and night-vision

Combined use of both of these new technologies can create a very powerful arsenal for the hunter, as these developments are complimentary in nature. Each device has its strengths and weaknesses, hence why it is important to keep your own personal hunting needs in mind and what particular use you are looking to get out of your equipment. While thermal imagery is perfect for spotting and observing wild game, night-vision shines in the area of highly defined and sharp imagery that allows for precise identification of game. The employed use of both of these technologies has shown itself to be particularly usefull while hunting wild boars. No matter the terrain, in the woods or out on the fields, in a stand or while stalking. A hand-held thermal device is the ideal tool to spot boars, analyze the composition of a group of them and as previously mentioned, to check of a sow is still in the stages of feeding piglets or if this is a more mature group of younglings. A mounted night-vision scope offers great opportunities for the hunter who wants maximum safety while hunting nocturnally, as the boar will appear in rich detail and without output delay from the device. Especially out on a field, night-vision technology really shines as there is less deflection of light waves that can potentially distort the imaging and less reflective objectives that obstruct the infrared amplification.

Further, it can be concluded that the use of a scope mount is highly dependant on hunting grounds and hunted game. In the woodlands, the use of a thermal mount is preferable, while the fields lend themselves better to a mounted night-vision device. If your hunting grounds are very varied, it is best to let your personal budget decide which device to get. Night-vision mounts are quite a lot cheaper, and a good quality device should cost you around 1.300 Euro and upwards (2020 prices) while a similiar quality thermal mount might run you upwards of 3.000 Euro. One must not forget other areas of use as well for these devices. Saving deer fawn, monitoring your hunting ground, wild game damage prevention and assisting search efforts are all high value applications of these technologies. The day in the life of a hunter is made easier by these technological improvements and hunting skills and ethics are furthered. The use of technology in a very tradition-heavy craft such as hunting can never be an issue, the important question is allways how technology is being used. And that question is allways up to the individual.